Who can win the Race to Dubai and how? 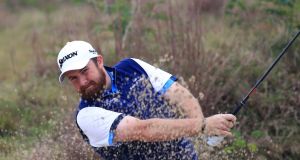 Shane Lowry is one of the players who can still win the Race to Dubai ahead of Rory McIlroy. Photo: AP

Back in the day when the Race to Dubai was in its infancy, Colin Montgomerie - a man who had won eight Order of Merit titles on the PGA European Tour - put on his soothsayers cap and predicted a changed world order. “I think we are shifting the balance of power away from the PGA Tour . . . you’ll find players like Phil Mickelson, Adam Scott, Ernie Els and Vijay Singh coming over more. You’ll get more of a world field in Dubai,” insisted Monty.

His prophecy was delivered with the kind of straight talk that brokered no argument, for he was a man who almost always was right. Even when he was wrong.

Some seven years into the new order that is the Race to Dubai, we know that Montgomerie got it wrong. Phil and Tiger and others didn’t take up European Tour cards, and there’s little rush from the new kids like Jordan and Jason to do so either. Although Patrick Reed’s presence in Dubai this week for the DP World Tour Championship is welcome, the reality is that there has been no shifting in the balance of power. The PGA Tour is still king.

Yet, for all that, the finale to the Race to Dubai this week has much intrigue, not least from an Irish perspective. Although just two Irish players have made it to the elite 70-man field, both Rory McIlroy and Shane Lowry entertain hopes - albeit one stronger than the other - of actually winning the Order of Merit which is a considerable feather in anyone’s cap.

There are seven players in with a mathematical chance of finishing the European Tour season as top man, but only two - McIlroy and Englishman Danny Willett - can determine their own destiny. A win for McIlroy or Willett would close the deal. In what is the 48th counting tournament of the season, it has come to this.

So, who can win out? The seven men with a chance of topping the 2015 Order of Merit - or the Race to Dubai to give it its rightful moniker - are:

Rory McIlroy: seeking back-to-back money titles and a third R2D in all, the Northern Irishman currently has a lead of 1,612 points over Willett. For McIlroy - who missed a meaty chunk of the season with his ankle injury and playing in only his 12th counting event - to win out, he needs to finish ahead of Willett.

Danny Willett: now within touching distance of McIlroy, Willett first of all needs to beat McIlroy’s score to leapfrog into top spot. A win, of course, would tick all the boxes for the Englishman, who hasn’t been out of the top two in the rankings since jumping out of the blocks with a win in the season opening Nedbank Challenge.

Justin Rose: a top-10 finish in the BMW in China enabled the former US Open champion to leapfrog Lowry into third. For Rose to win, he needs a win or solo second in Dubai but also needs McIlroy and Willett to finish third or worse (if he wins), or eighth or worse (with a solo runner-up).

Ben An: the winner of the tour’s flagship, the BMW PGA, An - in his rookie season is the outsider of those able to win the Order or Merit. He needs to win the DP World Tour Championship with both McIlroy and Willett finishing 29th or worse.