Time slowly but surely drifting away for absent Tiger Woods 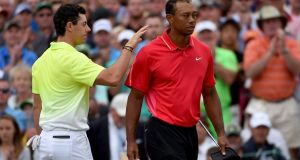 Rory McIlroy has said he would love to see Tiger Woods return to fitness and compete at the top once again. Photograph: Getty

Two years ago this very week, Tiger Woods remained in his commercial prime. He could claim a substantial appearance fee to appear in the Dubai Desert Classic, had won five times in 2013 and was a crucial part of golf’s narrative.

On the Friday afternoon of that tournament, albeit linked to commitments which are tied into appearance deals, Woods took to the range alongside his old friend Mark O’Meara for a golfing clinic. The pair provided a brilliantly enjoyable masterclass as planned for 100 or so onlookers, complete with microphones and Woods’ self-deprecation regarding the round of 73 he had just completed. It was educational and fun.

Only a comment from the 14-times major winner’s manager to an onlooking journalist spoiled the scene. “This is the Tiger you guys should be writing about,” was the claim. This was a depressing snapshot of the attitude which has played a part in Woods’s negative image. The man himself was relaxed and clearly not remotely concerned as to who was writing about what.

There is, of course, no Tiger in Dubai this time. His future has never looked more bleak as he continues an attempted recovery from ongoing back issues. The serious spectre of him not competing at all in 2016 looms large given the continuing silence regarding the 40-year-old’s professional aspirations.

An interesting insight on Woods arrived this week from Rory McIlroy. During an interview with Dubai Eye radio, when fulfilling commitments for Bose, the Northern Irishman spoke of personal appreciation for Woods, on and off the course.

“He gives off this persona of being quite intimidating,” McIlroy explained. “I’d love to achieve what he’s achieved, but then again the life he’s had to lead over the past 10 or 15 years is very, very difficult. He can’t go anywhere. It would be tough to live that life so I can see why he is so guarded.

“But once you gain his trust he’s great. He’s great fun both on and off the golf course. I only live 15 minutes away from him in Florida and we play some casual rounds together. He’s just a normal guy.

“I think he craves that normality in his life because his life has been so abnormal for so many years so in that way. I’m lucky I have a grounded life and I can do normal, everyday things and I can feel he craves that.

“He’s now with his kids trying to be the best father he can be. He’s putting all his effort into that. I respect him for that and that’s why hopefully one day he can come back and have another go at trying to win majors and give every golf fan what they want to see.”

McIlroy would be entitled to contrasting emotions regarding Woods’s predicament. In one respect, it is clearly easier for this golfing generation to pursue major glory when not facing Woods in his pomp. In another, and McIlroy readily admits as much, there would be a genuine thrill attached to the heat of battle with one of this sport’s legends. Phil Mickelson genuinely seemed to benefit as a golfer from having Woods as the highest bar to reach for. “Selfishly, it’s not a bad thing at the minute that Tiger isn’t competing with us,” McIlroy added. “But I’d love to see him, as a golf fan myself, just have one more crack at it.

“If he could get healthy first and foremost, which is a big obstacle to overcome. If he can do that and then piece his golf game back together I’d love to see him get another year or two at it because it would be great to see him go out on some sort of a high.

“This generation coming through, we grew up watching Tiger Woods and he was really the benchmark for us. So to see what he’s done in the game and to see how successful he was, he really changed the sport. He made it younger, he made it cooler and he made it more athletic. We all wanted to emulate what he did.

“I am a huge Tiger geek. I could tell you all his achievements, when he won there, where he won them, where I was when he won them. I was a huge fan of Tiger, just like a lot of my generation were. It was definitely him that set the benchmark for us that we’re trying to achieve now.”

The Desert Classic isn’t the only reason to pause for Tiger reflection. This week’s PGA Tour stop is the Waste Management Phoenix Open, the site of Woods’s inauspicious 82 last year but, more memorably, where he called on spectator support to move a boulder before being free to play an otherwise impossible shot in 1999. As the months fly by, a golfing past seems all Woods has to draw upon.