Tiger Woods roars into share of Wyndham lead after 65 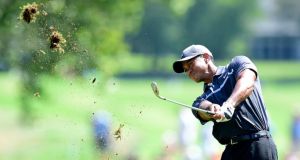 Tiger Woods plays his second shot on the eighth hole during the second round of the Wyndham Championship at Sedgefield Country Club in Greensboro, North Carolina. Photograph: Jared C Tilton/Getty Images

Tiger Woods roared back after over a year in the wilderness to tie for the Wyndham Championship lead on Friday and then said he didn’t expect it would take so long to return to a position that used to be second nature.

Less than three months after the worst round of his career, Woods looked more like the 14-times Major champion that he is as he recovered from a three-putt bogey at the first hole to card a five-under 65 in the second round at Sedgefield Country Club.

It’s the first time Woods has held an end-of-round lead since he won the WGC-Bridgestone Invitational at Firestone in August 2013.

On 11-under 129, the 39-year-old shared the halfway lead with PGA Tour rookie Tom Hoge, one stroke ahead of fellow Americans Davis Love III (66) and Chad Campbell (65).

Former world number one Woods, whose ranking has plunged to 286, downplayed his position, but his words could not disguise the look on his face of immense satisfaction.

“I’m only at the halfway point, We’ve still got a lot of golf to go,” Woods told reporters in an interview room that was constructed at the last minute after he entered the tournament for the first time.

“I wasn’t quite as sharp as yesterday. I kept leaving my iron shots above the hole.”

He admitted that it had taken him a lot longer than expected to find his game after undergoing major back surgery last year, and then reworking his swing with new instructor Chris Como.

“My game has struggled at the beginning of the year . . . but I’ve stuck with it. Chris has been fantastic. He’s really helped me through this entire process.

Woods, who last week missed the cut for a third successive Major at the US PGA, needs to win here to guarantee a berth in the lucrative FedExCup play-off series that starts next week.

Followed by an admiring gallery, Woods hit some shots of the highest quality on Friday, but also some poor ones, including a two iron off the 10th tee that he pulled so badly he was lucky to avoid some trees 150 yards away.

But the lack of rough at Sedgefield, and the shortness of the course, allowed him to get away with errors that might punish him at tougher venues.

The highlight of his round was a 10-foot eagle at the par-five 15th.

When his putt disappeared, the roar from the spectators in the overlooking skyboxes was almost earth-shaking. Some 200 yards away, spectators in the stand behind the 16th green also erupted, never mind that a player on that hole was about to putt.

It has been a remarkable debut at the tournament for Woods but he was not yet ready to say if his performance was enough to commit to returning next year.

“I’m just happy to be playing the weekend right now, okay?” said Woods. “I’m just working on trying to win this event and let’s go about it from there.”