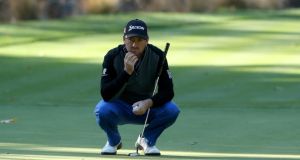 Graeme McDowell waits to putt on the 16th green during the third round of the Northwestern Mutual World Challenge at Sherwood Country Club. Photograph: Stephen Dunn/Getty Images)

Tiger Woods stayed on track for his sixth victory of the year as he maintained a two-shot lead after a brutally difficult day for scoring at the Northwestern Mutual World Challenge yesterday.

The American world number one ground out a level-par 72 in blustery winds with several tough pin positions at Sherwood Country Club to end the third round of the tournament which he hosts at 11-under 205.

In glorious late afternoon sunshine after a rainy start to the day, Woods rolled in a 12-foot birdie putt at the par-four last to retain control of an event he has won a record five times.

“It was a tough day,” Woods, who hosts the event, said afterwards.

“The wind was all over the place. It was really tough to pull clubs and the greens were softer. They were still pretty quick, and unless you got (the ball) above the hole, there are some really difficult pins out there.

“So it made it even more imperative to miss the ball in the right spots (below the hole), because we weren’t going to always hit the ball tight. Obviously a lot of guys shot some higher numbers.”

Zach Johnson, the first-round leader, was alone in second place after sinking an 18-foot birdie putt at the last for a 72. Bubba Watson, the 2012 US Masters champion, was a further two strokes back at seven under, after a 69.

Only four players in the elite field of 18 dipped under par for the day, ’s Rory McIlroy the best of them with a six-birdie 68 that left him a distant 13 shots off the pace.

Defending champion Graeme McDowell slipped from five under to two under as his challenge was blown off course.

Woods, two shots in front overnight after equaling his own course record with a stunning second-round 62, made a confident start, two-putting for birdie at the par-five second to maintain that advantage.

However, he bogeyed the fourth after taking a penalty drop when his tee shot ended up in a hazard and the par-three eighth after missing the green to the left off the tee to drop back into a tie for the lead with Johnson.

Johnson briefly moved ahead after sinking a six-foot putt to birdie the par-four ninth but Woods immediately responded, draining a 12-footer for birdie at the 10th to get back to 11 under.

Just two holes later, Woods was handed a three-stroke advantage as Johnson, who had bogeyed the par-five 11th after hitting into trees, found a plugged lie in a greenside bunker at the par-three 12th on the way to a double.

However, Woods recovered with a two-putt birdie at the par-five 16th, narrowly missing his eagle attempt from 15 feet, to forge two strokes clear.

Though Johnson rammed in his long putt on the 18th green to get to nine under, Woods followed him with his 12-footer to retain a two-shot advantage.

“I’m pleased at having the lead,” said Woods, who has gone on to triumph 48 out of 52 times when holding at least a share of the 54-hole lead on the PGA Tour. “Not real pleased with the way I putted today. I missed a lot of putts.”

The scoring average on Saturday was 72.998, despite preferred lies being in operation due to the damp conditions and a high-quality field that includes 12 of the world’s 20 players.

“Today was tough,” said Johnson, who was runner-up here to Woods in both 2007 and 2011. “It was just hard. I mean all-around survival slash commitment, trust, et cetera, et cetera, it was brutal.

“I had opportunities out there to post a really good number today, but I didn’t take myself out of it certainly with (birdies at) 16 and 18.”