Tiger has lost his snarl but does he still have the hunger? 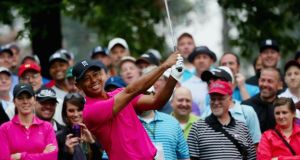 A more engaging Tiger Woods on the tee yesterday during practice for the Masters. Is it possible not to play tournament golf for two months and return with the necessary sharpness? Photograph: Getty Images

Someone has air-brushed Tiger Woods in his time away from the sport. The guy who has turned up at this 79th edition of the US Masters tournament – after a two-month break to work on numerous facets of his game – is different.

Witty. Engaging. He looks like Tiger; but he sure doesn’t act like Tiger. The real question, though, is can he play like the Tiger of old?

Woods has breezed down Magnolia Lane like a breath of fresh air, almost as if the time spent away from tournaments has regenerated old bones.

“I worked my ass off,” was Woods’s succinct analysis of how he had used the two months since he walked out of the Farmers Insurance Open at Torrey Pines back in February like a beaten man, just a week after shooting a second-round 82 in missing the cut in the Phoenix Open.

Quite simply, he is reinvigorated once he drives through the security gates and walks on to the pristine green grass.

Except this time it is different. Has he really found a cure for the pitching yips which so afflicted him in Phoenix and in San Diego? Is it possible not to play tournament golf for two months and return with the necessary sharpness? With this apparently new demeanour, joking and kidding and hugging old pals on the range, does he still retain the inner steel to finish the job in a Major?

One man thinks so and he’s the one who matters: Woods himself.

In responding to a query on what would have kept him away from the Masters, Woods said: “If I felt like I wasn’t hitting the ball as well as I needed to or even chipping and putting. I needed to have all facets of my game come around and they all have. We’ve spent a lot of time, a lot of work on this, and it’s finally paid off.”

That work was a complicated process that required Woods working “sunup to sundown, and whenever I had free time”.

With his new coach adviser Chris Como – who went so far as to ask Lee Trevino for short game advice – providing assistance, Woods worked on embedding a familiar pattern into his swing. “Once I started picking it up, it came pretty quick,” said Woods.

He explained that his work with his previous coaches – Butch Harmon, Hank Hainey and Sean Foley – had different “release patterns” which led to his putting changing, his full swings changing with each one.

“They were all seamless throughout the bag, but all different release patterns...it’s new but old, or old but new. I’ve been there before.”

There is something different about his routine. Woods has been a different man this week on his return, listening to hip-hop music on the range and in the short game area – just as he does when practising at home – and engaging with the crowds to a greater degree that he traditionally does. His decision to go out late on Monday evening (in the past he was in a race to be first out on the course) led to a unique practice round experience for those who had stayed at the course.

He’s a born competitor even if the rivals have changed. Rory McIlroy going for a career Grand Slam. Jordan Spieth, playing the hottest golf of all.

“Competing is still the same, I am trying to beat everybody out there. I prepare to win, and expect to go and do that,” said Woods. “The only difference is I won the Masters (in 1997) when Jordan was still in diapers. That’s the difference in that guys are younger, a whole other generation of kids are coming out and the game has gotten bigger...the game has evolved, nobody worked out except for Vijay [Singh] and myself and now everyone has their trainer here.

“You see guys are losing more weight, getting fit faster, doing explosive exercises, doing things people thought was unheard of in our sport.”

Woods was the trendsetter as far as gym work was concerned and has had his problems with back injuries and knee surgery. But he remains motivated to add to his four green jackets and his 14 Major titles. “My greatest motivation? Winning. I like it.”

1 Champions League draw: Manchester United handed tough draw on return
2 Leo Cullen: ‘It feels like it all came crashing down on top of us’
3 Dave Hannigan: How Christy Ring aroused the curiosity of American media
4 When Down’s 1960 All-Ireland victory brought down barriers
5 Great expectations bring pressure for Dundalk ahead of big-money clash
Real news has value SUBSCRIBE

Novak Djokovic rings up career win number 70 at Roland Garros 19:17
Champions League draw: Manchester United handed tough draw on return 17:27
Leo Cullen: ‘It feels like it all came crashing down on top of us’ 15:41
Genoa’s Serie A match postponed over Covid-19 outbreak 15:25
Everton striker Dominic Calvert-Lewin among new names in England squad 14:36
Here is your handy guide to sport on television this week