The rise and rise of LPGA Tour-bound Leona Maguire 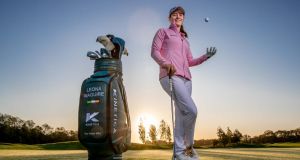 Leona Maguire at Castleknock Golf Club on Wednesday: ‘Every day I’ll be practising for eight or nine hours, focusing on all aspects of my game.’ Photograph: Morgan Treacy/Inpho

Leona Maguire will play the final event on the Ladies European Tour (LET), the Andalucía Costa del Sol Open de España at Aloha Golf Club in Marbella in late November, during which she’ll celebrate her 25th birthday, bringing to a conclusion a remarkable year, the highlight of which was securing a place on the LPGA tour for next season and the fulfilment of a lifelong ambition.

Two victories on the Symetra Tour, the second tier of women’s professional golf in America, saw her finish seventh in the rankings and secure one of the 10 coveted cards in her first full season as a pro since graduating with a degree in Psychology from Duke University in North Carolina.

Her progression from an adolescent star through an amateur career – arguably the pinnacle of which was a record-breaking 135 weeks as the world number one in women’s amateur golf – to becoming professional is unparalleled in Irish sport. The catalogue of titles, representative honours and awards is a weighty volume.

Apart from the tournament in Spain, she’ll spend the rest of the year enjoying the home comforts of Ballyconnell in Co Cavan, albeit preparing for her LPGA debut in the third week in January. Restless by nature, she enjoys the regimen of practice.

I would play the nine-hole, par three course at the Slieve Russell, a lot. That helps me to sharpen my irons

“I will be in the gym four times a week. I’m trying to add a few extra yards [in distance off the tee]. That’s a big focus,” she explained.

“Every day I’ll be practising for eight or nine hours, focusing on all aspects of my game. Over 50 per cent of it would be on the short game: putting, lots of wedges. I would generally spend an hour and a half to two hours max on the driving range, then some on course stuff.

“I won’t play 18 holes every day; maybe nine holes and 18 every second day. I would play the nine-hole, par three course at the Slieve Russell, a lot. That helps me to sharpen my irons.”

She’ll make time to indulge in a little on-course sibling rivalry with her brother, Odhran, and twin sister and fellow professional, Lisa.

Slieve Russell golf club, two miles from the family home, provides the primary backdrop in practice terms, but she also travels to Black Bush to work with her coach Shane O’Grady and occasionally Carton House and Portmarnock Links.

Last week Maguire fulfilled commercial commitments, one of which was to announce Kinetica Sports Nutrition as her official golf bag sponsor. Her focus will return to golf and trying to ensure that her game is in rude health by the time she heads for the US.

The LPGA Tour’s draft schedule for next year lists 35 tournaments. She won’t play them all but said that “with the status I have for the first good bit of the year I will be able to get into all the events I want to. I start in Florida, go to Australia, there is one in China and then back to the States.”

A priority over the next couple of months is to hone her game to the levels that would allow her to be competitive when measured against the marquee names in women’s professional golf. Increased distance off the tee is a primary goal.

“Depending on conditions I would hit it anywhere between 250 and 265 [yards]; that’s average, maybe slightly above average.

“The longer hitters like Lexi Thompson and those girls are hitting it 280, 285 yards. I am never going to be on the same level as a Lexi but I can definitely pick up 15 or 20 yards, which would be an added bonus. It’s not necessary but it gives me more options. That is where the focus in the off-season will be, picking up some distance.

“The big thing I noticed is that the courses for the Majors tend to be longer, greens are firmer and faster. Going in with a shorter club, hitting the ball higher always helps; that and having your short game as razor-sharp as you can.”

Her experience of playing in several Majors as an amateur is a source of comfort, as is having previously rubbed shoulders with the sport’s elite.

“There are a lot of familiar faces that I have played junior golf with, amateur golf with and college golf with. I was team-mates with some of them in college and in Curtis Cups and junior Solheims, stuff like that.

“It is a lot of the same people, which is nice, so when I go out there next year I will have some help and they can show me the ropes a little bit. Four of the girls I played with in college have come on the Tour this year which is nice to see.”

Maguire will head out to Florida in early January for a bit of warm weather practice but hasn’t yet secured a base in the US. She said: “It is something I need to look into but I kind of have to figure out how long I would be there and if it is worthwhile having somewhere or not.”

Another item on the to-do list is to decide on a caddie. She explained: “I have a few options that I am considering at the minute. It’ll be a little bit of trial and error, probably, as well. You spend a lot of time with your caddie and it’s important that you work well together.”

So has Lisa – who has frequently caddied for her sister – applied for the job? Maguire laughs. “Lisa has not. She will not be applying for the job. She said that she has done her bit and has had enough.

“I am pretty independent on the course. I don’t rely on my caddie too much, but I guess when I do it is more to get rid of doubt. Yardages and stuff like that I’ll do myself. In a lot of the amateur and college golf I had no caddie. This year was a little different, getting used to someone being there all the time. I was figuring out what I liked and didn’t like.”

So what is she like to caddie for? Maguire smiles. “That’d be a better question for Lisa. I would say that I am pretty independent but when I want to know something, I want to know it right. I am sure that I am decently demanding.

“I have high standards and expectations for myself and I would probably have that of my caddie as well. There is give and take at the same time. I have gotten along pretty well with all the caddies I have had so far; none of them have quit and dropped the bag.”

She is pragmatic when it comes to goals for her first season on the LPGA Tour. “There is definitely going to be a period of adjustment, obviously, like there was when I went to the Symetra Tour.

“I obviously played a lot better on the Symetra Tour this year than when I first went on it at the end of the previous year. I’d like to hit the ground running. I thought I got off to a really good start this year; that would be nice again.

“But there are brand new golf courses, some different countries and getting used to different grasses and conditions, so for me it is about being as adaptable as possible. Then just seeing how [my game measures up]. You can have all the prep done but you don’t really know until you have that acid test of being out there week on week.”

Irish sport and Irish athletes in general really bond together well. If any of us do well, all of us support one another

She is a keen advocate of the 20x20 campaign, which seeks to shift the cultural perception of Irish women’s sport.

“One of the good things about the 20x20 is that a lot of the schools are doing projects or posters and I have gotten some really nice messages and pictures.

“Irish sport and Irish athletes in general really bond together well. If any of us do well, all of us support one another, kind of feed off each other. It transcends the sport, it doesn’t matter what it is. If it is Kellie [Harrington] and her boxing, Ellen [Keane] and her swimming, whoever it is we support each other, which is really nice. Irish women’s sport is now as strong as it has ever been.

“The fact that there were no Irish ladies on the LPGA tour, we looked to other sports, Katie Taylor and people like that. It’s nice now that any young girl who wants to play golf [professionally], they have two LPGA players [former amateur teammate Stephanie Meadow is the other] to look up to.”