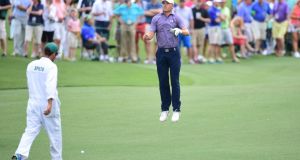 Jordan Spieth jumps to watch his ball during the second round at Augusta National. Photograph: Jim Watson

History changes. Jordan Spieth, at just 21 years of age, audaciously ripped up the record books in this 79th edition of the Masters – reaching the midpoint with a tournament low 36-holes score of 130, 14-under-par – to defy the old theory that experience works like a 15th club in a player’s bag in these parts. The young hold no fear, it would seem. Time moves on.

And, too, there was defiance of a different type from Rory McIlroy. With the weight of the world on his shoulders, as he seeks to become the sixth player in the professional era to win the career Grand Slam, the Northern Irishman flirted with a missed cut in a front nine of 40 shots, hovering on the cut mark for a time, only to show his character: McIlroy came home in 31 for a 71 for 142, which left him in tied-19th, if all of 12 shots behind. You never know, do you?

On another sunny day, with forecast thunderstorms failing to materialise until play was done and dusted, Spieth added a second round 66 to his opening 64 to claim the midway lead. His 36-holes total beat, by one stroke, the previous mark established by Raymond Floyd in 1976. “I don’t know what course Jordan is playing, but it is not the same one I am playing,” quipped Darren Clarke, who rediscovered some of his own form in safely negotiating his way into the weekend.

Spieth - just as he did in the opening round - stole the show. By the numbers, he has hit 28 of 36 greens in regulation over the two days and found 20 of 28 fairways. The real number crunching, though, concerns how few shots were needed to get the ball into the hole and nobody in the history of the tournament has done it better. In using 130 strokes, he opened up a five stroke lead over Charley Hoffman.

Locked in a chasing group, in a three-way tied for third, on seven-under 137, were Dustin Johnson – who started with a double-bogey only to respond by becoming the first player in Masters history to record three eagles in the same round – Justin Rose and Paul Casey. Phil Mickelson rallied with four birdies on his homeward run for a 68 for 138.

Bubba Watson, the defending champion, shot successive 71s for 142 to be left with a mountain to climb, his challenge made all the steeper with a heavy putter. He had three three-putts to ponder. “If I come out with a hot start, hot weekend, you never know what could happen,” said Watson.

But the first two days here belonged to Spieth, a player who, in two years, has moved from 840th in the world rankings to a current fourth.

Any hurt from losing a play-off in last Sunday’s Houston Open clearly hasn’t lingered. If anything, it has strengthened his resolve. Spieth has finished first-second-second in his last three tournaments and has not only maintained that form but, if anything, taken it to another level. “I have felt very comfortable, the golf course plays to my game,” he said.

Spieth had a bogey-free 66 that included six birdies. A year ago, he held the 54 holes lead going into the final round only to fall foul of Bubba Watson’s final round charge. This time, a year on, he has matured into a different, more hardened player. He has won four times globally since last November. He is contending week-in, and week-out.

Was his youth a hindrance? “It seems like there’s been quite a few guys that have had success at a young age here. Seven won it when he was 23. Tiger at 21. Obviously I am not comparing myself to those guys in any way, but I am saying it ‘s only taken them a time or two to figure it out to get into contention and to close out the tournament,” said Spieth.

But there is no putting the cart before the horse, so to speak. Spieth has an old head on young shoulders. “I understand that at a place like Augusta and a tournament like this, a lot of things can happen, a lot of lead changes can happen. Holes can lend birdies and they can lend double-bogeys. So you have to be really patient, not try to force anything . . . . . you can’t get ahead of yourself.”36

As for creating history in setting a new low total for 36 holes, Spieth responded: “As far as history and what has happened the last couple of days, it doesn’t mean anything unless I can close it out. I don’t want to be somebody to go in as the 36 hole best record, but somebody who didn’t win. Ultimately, I just need to set a new goal for myself and try and shoot under par rounds on this weekend.”

Spieth, a special talent to be sure, is halfway towards destiny. But he need only look back to McIlroy’s travails of 2011 and, indeed, his own final round duel with Watson last year to know that it ain’t over until it is over.