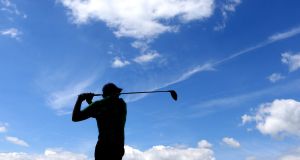 Tullamore and Maynooth University star Stuart Grehan has been selected alongside Jack Hume in the nine-man Britain and Ireland side for the St Andrews Trophy match against the Continent of Europe.

The reigning South of Ireland champion, will tee it up with Walker Cup stalwart Hume at Prince’s Golf Club in Kent on from July 20th-21st with Naas’ Conor O’Rourke named as second reserve following his St Andrews Links Trophy victory and his performance in the European Amateur Team Championship.

Pauline Walsh from Headfort will captain the side with ILGU President Valerie Hassett (Ennis/Lahinch) as manager.

From a field of almost 500 golfers representing nearly 100 clubs former Irish International and Walker Cup player Jody Fanagan and his son Harry won the All-Ireland Father and Son matchplay with a 4 and 3 win over Peter and Graham O’Connor from Foxrock in the final. The O’Connors, who produced excellent golf all week, were the leading gross pair with 74 in the qualifying round while the Butlers, John and Jamie, of Dunmurry Springs and Naas led the qualifiers with a net score 68.

Castletroy’s Eamonn Haugh claimed the Irish Seniors Amateur Close title by two shots at Tralee. Trailing by one, after opening rounds of 76 and 74, going into the final round, the former Munster interprovincial and 2014 Munster Mid-Amateur champion closed with a 73 to win on seven over par 223 from Castlerock’s David Mulholland (78 76 71). Overnight leader Pat Lyons (74, 75, 77) finished three behind in third with Lahinch’s Declan McInerney (77, 73, 77) fourth. “I’m relieved that I held it together,” said Haugh. “It doesn’t get any better than this. I was just delighted I was able to hold on and I didn’t fold.”

Richie Tighe of Elm Park produced a remarkable double in the Elm Park Scratch Cup, sponsored by Westwood Club, on Sunday. The two handicapper followed up an opening round of 72 with a record breaking 63 in very windy conditions to win by six shots.

Starting on the third hole, he dropped shots at his first two holes before producing a run of eight consecutive threes on his card which included three birdies and two eagles. He then added another two birdies to beat the previous course record by one shot. Stephen Healy of Royal Dublin finished second with rounds of 69 and 72 with Shane McDermott in third place.

The R&A is working with national golf bodies in Britain and Ireland to promote nine hole golf as a quick and enjoyable way to play golf either socially or competitively.

A group of 30 amateur men and women golfers participated in a new nine hole championship staged by The R&A at Royal Troon on Saturday last.

The group participated in a handicap pairs competition at the historic Ayrshire links just five days before the 145th Open gets underway, playing holes 1-5 on the front nine, before tackling holes 15-18 coming down the home stretch.

Denis Gaffney and John Prendergast from The Island GC were the overall winners and thoroughly enjoyed the experience of playing in a nine hole competition on the eve of golf’s oldest Championship.