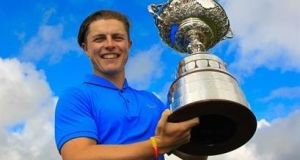 Portmarnock’s Conor Purcell, winner of the South of Ireland Championship, will gain his first Irish cap in the Home Internationals at Nairn in Scotland next week.

Ireland’s team for the men’s Home Internationals at Nairn on August 10th-12th will include four new caps as Seán Flanagan, Tiarnan McLarnon, Conor O’Rourke and Conor Purcell have all been rewarded for their considerable progress over the past 12 months.

Flanagan and Purcell are fresh off maiden Championship wins, having clinched the North and South of Ireland titles respectively recently. McLarnon has been a model of consistency since his Irish Close victory last August, while O’Rourke’s victory at the St Andrews Links Trophy was the highlight of a breakthrough season for the Naas man.

Ireland’s David Higgins withstood the charging Andy Raitt to run out a convincing winner of the Titleist & FootJoy PGA Professional Championship at The Oxfordshire last week.

The Waterville Links pro carded his second 66 of the week to post a 15 under par total of 273 and three-stroke victory over Raitt who fired a final round 67.

Higgins admitted to a few nerves but any jitters were alleviated by a devastating burst of birdies around the turn with gains at 10, 12, 13 and 14 helping him to a six-under-par final round.

The Delgany pro collected six birdies and eagle on his way to victory. Shane Franklin finished alone in second following a five under par 67 with Michael McDermott (Pure Golf Leopardstown) ending the day in third with a 68.

All-Ireland champions Kilkenny are on course to retain the Fred Daly Trophy following their 4-1 victory over Laytown & Bettystown in the Leinster final at Royal Tara.

The result adds another chapter to a colourful few days for Kilkenny’s Mark Power, who was within touching distance of adding the European Young Masters title to wins in the Peter McEvoy Trophy and the Irish Boys Championship already won this season until he triple bogeyed the last hole in Switzerland last week to finish fourth

Last year’s winners Clodagh Coughlan and Aoife Ni Thuama from Douglas made it two in a row when they won the national final of the May Fitzgibbon Trophy with a fine score of 39 points. Enniscrone’s Ailbhe Bourke and Co Sligo’s Niamh Cronin were five back in second place with Rebecca Gardener (Carnalea) and Molly O’Hara (Clandeboye) third on 32 points. Katie Keenan (Kilkenny) and Sarah Burke (Mullingar) took home the best gross prize on the day with 28 points.

Greenacres’ Keaton Morrison rolled in a clutch birdie four at the 18th in Lurgan to take the Irish Under 14 Boys Open title from Athlone’s Eoin McGrath and Roganstown’s Joshua McCabe.

Morrison’s fine 73 at an immaculate Lurgan was just about enough as McCabe’s own birdie effort in the following group on the final hole just slid by the hole, while McGrath’s late charge – finishing with two birdies – sealed second spot from McCabe after both finished on 74. Edward Rowe from Tandragee, with a 75, finished fourth and also won the Under 13 Trophy.

Gort bridged an eight-year gap when they had a 3-2 winning margin over Roscommon in the Spanish Tourism Board sponsored Irish Mixed Foursomes Connacht final at Tuam GC. Roscommon and Gort both had easier than expected semi-final wins over Enniscrone and Ballinrobe respectively.

Gort now go on to Shandon Park in early September to represent the province in the All-Ireland finals.

l After two very close matches Hollystown and Elm Green are through to the final of the Best Cup. Hollystown beat Charlesland 3-2 while Elmgreen had the same winning margin over Howth.