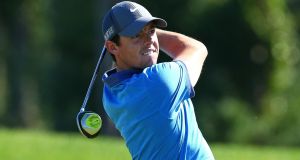 The chase starts here and now for Shane Lowry. He is in the rearview mirror of Rory McIlroy and, as luck – or design perhaps – would have it, the Offaly man has been handed a tee-time with Down man for the opening two rounds of the Turkish Airlines Open on The Montgomerie course, where big bucks and mega points in the race for the Race to Dubai will contribute to a sharpening of minds and a flexing of muscles.

McIlroy, seeking back-to-back Order of Merit titles and a third in four years, currently holds the edge over everybody in the race.

Lowry, though, is fifth and in pursuit. No stone will be left unturned. He is playing all four of the ‘Final Series’ tournaments – here in Turkey, two in China and the finale in Dubai – in his quest to catch McIlroy and, coming on the back of a runner-up finish in his last outing at the British Masters, there is a spring to his step.

The trick, as Lowry admits, is to remain level-headed and clear-minded in chasing down McIlroy.

“It is the same old stupid golf cliches. It is one shot at a time, one round at a time, trying to shoot as good a score as I can. To be honest, I am playing with a lot of confidence at the minute. My golf is kind of carefree and I don’t want to put too much stuff into my head,” said Lowry.

He added: “You stand up and hit your shot, you find it and you hit it again. That’s golf. Sometimes it’s easier to do that than other times and I am feeling at the minute it is easier for me to do that now.”

So far this season, Lowry has successfully managed to keep a clear head and to tick boxes. As things stand, he is 556,250 points behind McIlroy in the Race to Dubai table. Then, there are also the Ryder Cup points on offer in this stretch of tournaments which are confined to the elite. That is the company Lowry is now in, up with the best of the best.

“There’s a lot of new stuff for me, a lot of firsts. This is my first time to have a chance of doing really well in the Race to Dubai. Obviously I finished 10th last year, but I have a real chance of finishing well this year, I’m up there, with a real chance . . . a couple of good weeks and I’ve a good chance of also getting into the top 10 in the world. There is stuff like that,” said Lowry.

For sure, this upcoming stretch of four big tournaments with no cuts is, as Lowry puts, “massive”, with the potential to be career-defining.

“The plan is to go out and shoot the best score I can, to give myself chances on the greens and to hole a few putts. I’m driving it well. My iron play is good. I am happy. I feel like I have my putting where I want it, my set-up is good,” said Lowry.

For McIlroy, the key is also in getting the putter working. The world number three – whose last win on the European Tour was in the WGC Matchplay back in May – admitted: “I’ve been struggling with my putter more than anything else . . . I’ve felt like every time I missed the putt, there was a question that followed it. Did I pull it? Did I misread it? Did I whatever?

McIlroy – who is playing three of the final four events on the European Tour, skipping the BMW Masters in China – had problems with his putter on his last outing, in the Frys.com on the PGA Tour. But he doesn’t see it as an issue.

“I feel I’m a good putter. I feel like I hole out well. I definitely hole out much better than I used to do. And when I get my eye in, I’m really good. I do hole a lot of putts. But, yeah, I don’t get my eye in as much as I’d like to . . . I’ll always be somewhat of a streaky putter.”

Lowry and McIlroy – together with Danny Willett – are in the marquee group for the first two rounds here, which Lowry for one sees as a positive. “It creates a nice atmosphere. From the world go, it feels like I am in the tournament,” said Lowry.

He’ll also be able to keep a closer eye on the man he is pursuing.