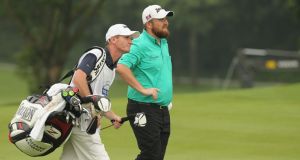 Shane Lowry during round two of the recent Volvo China Open at Genzon Golf Club.

Each week when you are out on tour, there is one thing you have no control over. It is the tee time you are allotted. I know some players absolutely dread an early morning start in the first round and, if you were to take a straw poll in the locker room, there’s no doubt you’d find the preference among 90 per cent of the players would be for a late-early tee-time: meaning you play in the afternoon in the first round, and early the next day.

I’m actually inclined to hope for the other way round, which puts me in the minority. The reason for this is that I am always anxious to get going in a tournament, to get up and running. So, an early tee-time – even if that means an alarm call at an unearthly hour – doesn’t bother me in the slightest.

In China last week, I actually had one of those 4.30am alarm calls on the Thursday morning. Unfortunately, my play in the China Open – an opening 72 backed up by a frustrating 77 – didn’t go to plan and I was home in Ireland, after another missed cut, by Saturday. Two days earlier than planned or anticipated. Much too early for my liking, especially after heading out to Asia with so much optimism and looking to kickstart the season!

All the hard work that is put in on the range and elsewhere is designed to reap the benefits in tournaments. To travel half-way around the world and to miss back-to-back cuts in Malaysia and China in successive weeks really hurt.

Wake-up call
Anyway, that wake-up call in the middle of the night is one that has happened a few times in my career, including back in the British Open at St Andrews in 2010 and it didn’t do me – or Louis Oosthuizen, for that matter, who had a similar early call and went on to win that week – any harm.

To be honest, you are inclined not to entirely trust the alarm going off when those early tee-times come your way. It means you eat early the evening before, you’re probably in bed before 8pm, get some sleep and, then, you’re instinctively waking up on the hour every hour from about two o’clock to make sure that you don’t lie in and oversleep.

The tee-times on tour are done off the world rankings and those who have won tournaments with the top players in the what are called the TV groups, usually three groups on either side of the draw. You’re allocated early-late or late-early tee times.

In most places, we take either a courtesy car or a shuttle bus from the hotel to the course. For those early times, there’s usually no breakfast available in the hotel, with little or no life around, and you only eat when you get to the course. You know you’ve been given a really early time when you’re travelling on the buses with the tournament officials.

My routine would be to grab a bit of breakfast in the players’ lounge and then head for a 20-minute physio session to loosen up. My caddie, Dermo, will usually meet me there and bring along my golf shoes. In my early years on tour, I didn’t bother with physio. But I now find it hugely beneficial.

Practice range
I usually head on to the practice range where I’ll hit five sand wedges, five eight-irons, five six-irons, five four-irons and then finish off on the range by hitting a few drivers. Then, I’ll spend some time on the putting green and always finish off by holing out a few four-footers before going to the course. In 99 per cent of cases, that putting green will mimic exactly the speeds expected on the actual golf course. The last thing a player wants is to discover that there is any difference in speed or consistency.

The flip-side of the coin is a late tee-time, where you have to kill time before you get to the business of playing. Every tour player would obviously prefer a late tee-time on the weekends because that means you are in the thick of things. My plan is always to get to the golf course at least an hour and a half before my tee time.

I’m back home for a couple of weeks and plan to return to action in the Spanish Open which could conceivably star a run of eight tournaments in nine weeks. Busy times! This week, I’m heading down to Kinsale for a few days to take in the Rugby Sevens tournament and I plan to do some preparatory work for next month’s Irish Open by playing a couple of practice rounds at Fota Island.

I’m looking forward to the Rugby Sevens, where my friends – the Lightning Bolts – will be playing. They’re all from St Mary’s Rugby Club and I got to know them through Darragh Fanning. This tournament is usually great craic. A mix of some work and some play before I get back out on tour and hopefully put the disappointment and frustration of the past two weeks in Malaysia and China behind me.