Shane Lowry: Jet lag I can put up with but not airlines losing my clubs 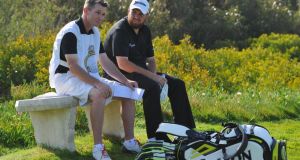 Shane Lowry and his caddie take a break during the Hassan II Trophy in Agadir, Morocco.

There are a couple of perils associated with long haul travel. One of them is jet lag which is unavoidable – I got it again on the trip to Malaysia this week – and the other is when your clubs go missing in transit. Now, that one is avoidable if the airlines are doing what they’re paid to do. For some reason I seem to be the victim more than anyone else I know on tour.

I’ve become the butt end of jokes from some of my so-called friends in the locker room and caddies on tour for the number of times that I’ve gotten to some far-flung or even not-so-far-away destination only to be left waiting by the carousel in the airport with no sight or sign of my golf clubs.

I’d say it has happened at least eight times in the past 18 months. There were about 10 players on my flight into Kuala Lumpur on Sunday and I was left waiting for what seemed an age. I thought, “here we go again”. But, finally, thankfully, long after everyone else, the clubs appeared.

It is very frustrating when your clubs don’t arrive. It’s a bit like a carpenter going to do a job without any tools. The golf clubs are my tools and, although they usually arrive a day or two later in time for the tournament on those occasions they’ve gone missing, your preparation is definitely affected.

Business class
A lot of those times I’ve been travelling business class – which I do on long-haul flights – and although I am civil and respectful with the customer services people working at the desks, it’s not their fault, I am very annoyed with the actual airlines when it happens. You’re paying good money for a service and you expect your clubs to get there at the same time as you do.

As I’ve said, the golf clubs are my tools of the trade and you can’t do your job properly if you don’t have them. If it happens in Europe, it is not so bad because you can go to the tour trucks and replicate your bag as best as you can. But if it happens that your clubs go missing in Asia or in the US, it is definitely more of a problem.

I remember playing in the Bridgestone in Akron a few years ago and my actual luggage didn’t make it in time for the tournament. I had to go to the pro shop and kit myself out.

When that happens, you don’t have your own gear with your sponsors logos – but it is not the end of the world and is not as bad as when your clubs go missing.

It may sound easy to just get a new set of clubs into your bag and off you go. It is not so simple. I have my driver for three and a half years and my irons for three years. I’d change my wedges now and then and the putter can change more frequently. It would be a player’s worst nightmare if your clubs didn’t arrive in time for the tournament.

Thankfully, that hasn’t happened – yet – since I’ve turned pro.

Borrow a set
The only time I ever played an event without my own clubs was the Irish Close Amateur Championship at Cork Golf Club. That was in 2007. The previous week I’d been playing in the East of Ireland at Baltray and my clubs were stolen from the boot of my car.

I had to borrow a set of clubs from my friend Stephen Grant for  Cork and there was some karma in the fact that I then went out and won the Close. It shows how talented I was back then to win with borrowed clubs!!

Those stolen clubs or bag never surfaced, which I thought strange. I thought they might have come up on eBay or something because it was a nice TaylorMade tour bag that the GUI issued us with – there wouldn’t have been many of them around – and a lovely set of Titleist clubs. But I never heard anything about them again.

As for jet lag? Well, it’s part and parcel of travelling the distances that we do. I reckon I only got four hours sleep the first night I got to Malaysia – no trouble with my clubs in transit this week – but you adapt to it by having an early practice round.

It’s actually strange in a way because when you have jet lag you know you’re going to get tired and some mistakes can creep in so you actually focus more on what you have to do.

This is my first time in Malaysia and the heat is unbelievable. The course is quite demanding off the tee but one of the very real issues this week is staying properly hydrated – I’ll add some Dioralyte to help the hydration – and you have to keep drinking water.

There’s a strong field here, with a lot of players who played in Augusta last week, and there’s quite a few Ryder Cup points up for grabs.

From now on, I have a good schedule – moving on to China next week – and I’m hoping to get some momentum going this week and kick-start things by playing all four rounds and playing some good golf.