Shane Lowry embracing the ride on a rollercoaster season

‘I have won one, had a great chance to win another one. Statistically that is decent’ 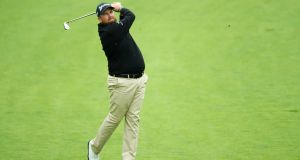 Shane Lowry practices ahead of the US PGA Championship at Bethpage Black. Photograph: Warren Little/Getty

The head gasket blew off. Shane Lowry had just missed a short putt to lose $100 to Pádraig Harrington and, for those feeling a blast of the cold air sweep over the ninth green of the Bethpage Black course here on Long Island, his reaction was one to warm the cockles of the heart.

In a week where there will be many more important putts, Lowry’s ire at himself told its own story. One, he doesn’t like losing. Two, especially to Harrington. That Harrington’s caddie Ronan Flood allowed himself a smile, and Lowry’s own father, Brendan, indulged in a hearty laugh, told the undercurrent of the healthy rivalry that forms part of bringing an element of competition into practice rounds.

Within minutes, though, Lowry was back to his jovial self; so relaxed, in fact, that he could have been sharing a television studio with Tommy Tiernan, joking about the bridge in Clara and of what it is like to win a million euro for hitting a little white ball around a golf course.

For sure, the more serious business lies ahead. What will it bring for Lowry? Even he doesn’t know, not for sure. Lowry’s season has been a roller-coaster of highs and lows. The highest point was at its start, winning the Abu Dhabi championship on his seasonal debut. The lowest point was in missing the cut at the Masters.

In the week after that missed cut in Augusta however, Lowry travelled to Hilton Head and very nearly became a wire-to-wire winner of the Heritage. He finished third in the end, but that rebound just showed the fickleness of life on tour; certainly for Lowry. No flat-lining for him, rather ups and downs; one week contending, the other having the weekend off.

“The way I am looking at my season so far is, I have played what 10 tournaments so far? I have won one, had a great chance to win another one. Statistically that is decent. If I can do that every 10 or 11 tournaments I would be pretty happy. The down times are not great when you are missing cuts but when you get yourself in contention every few weeks it is really nice. There is nothing more frustrating than making every cut and not having chances to win,” said Lowry.

This is Lowry’s eighth appearance in the PGA. Just like this season’s form, his previous outings have seen him blow hot and cold. There are three missed cuts in the equation, but also a tied-12th finish in Bellerive last year when he was very much in contention coming down the stretch.

What of this week? “I would be fairly confident I will do okay. I know better than anyone golf’s a funny game and you don’t know what’s around the corner. I have prepared as best I can and I will see what it gives me. I will try my best . . . I think i can give it a run. I wouldn’t be playing if I didn’t think I could. I will go quietly about my business the first couple of days and hopefully get myself there or thereabouts.”