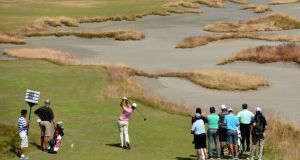 Beau Hossler hits a shot as JB Holmes looks on during a practice round prior to the start of the 115th US Open Championship at Chambers Bay in University Place, Washington. Photo: Ross Kinnaird/Getty Images

Unique is one word I could use to describe Chambers Bay.

I was lying on the physiotherapy bench the other day when a huge, low-flying US military aircraft literally shook the temporary structure – an elaborate, state-of-the-art tent – that is the players’ locker room for this week’s US Open. There is no grand clubhouse, just a line of white marquee tents that actually do the job very well. The plane gave it a good old rock and roll.

Getting physio is part and parcel of my daily routine and the demands of this course mean it is more important than ever this week.

I know I will definitely sleep well on the flight home, that after playing four rounds on this course I will be wrecked. It is a mental battle as much as a physical one but it is what it is and I actually really like the challenge that is being put up to us.

The course is definitely different than anything I have ever seen before. I think it is good. Before we got here there were all sorts of warnings and rumours about what we would be facing but, judging from the talk in the locker room and out on the range, quite a lot of players like the place now.

Sure, there’s a few holes that are quite tricky; on those, you just try and run off the green with a par and try to make some birdies in other spots.

Okay, the Old Course at St Andrews is as genuine a links as you can get but Whistling Straits, where the US PGA is in August, doesn’t actually play like a links. It plays soft, in the air, I know that from previous visits.

I thought that Chambers Bay would be something similar but it really is very linksy and probably the closest thing to a true links outside of Ireland and the UK that I have seen. The course is playing fast and firm and in some ways reminds me of home; the greens are very similar to the grass that you putt on in Portmarnock.

I was playing a practice round the other day with Marc Warren and saw the rough that’s down the right of the sixth. I turned to my caddie, Dermot, and said, ‘If I hit it in there during the tournament, I’m giving you permission to punch me’.

There are some places you just don’t want to be, and that’s one of them.

It looks great, so brown. It’s like being in St Andrews for the Open in summer and all you see is one brown fairway after another. Here, though, the difference is the elevations: you don’t get changes like that on the old links courses.

I only have one wooden club in my bag this week, just my driver. I don’t have a 3-wood or a 5-wood and have put a 2-iron and a 3-iron in the bag along with an extra 56-degree wedge for shots from around 100 yards and there’s a few extra things I can do with that club.

It is going to be a mental battle and I think the gameplan is to keep ticking the boxes with pars and try to take birdie chances on holes like the eighth, and on the first and 18th when they play as par fives.

I’m going in with a positive approach. I think if you start criticising golf courses when you are going around in practice you are going down a slippery slope to going home on Friday evenings.

You only get into a bad frame of mind criticising.

The golf course is what it is now; there’s a few people complaining here and there about how funky it is, but the general consensus is that if is quite good and people are going to enjoy playing.

In my own mind, I know a lot will come down to how I putt this week. I have an old Odyssey putter, one I’ve had since 2010, back in my bag. I feel comfortable over the ball and there’s actually a familiarity as well, standing there and the greens look the same as at home.

Do I think I can win? I feel if I put myself into position, I definitely have the game to. I just need to be myself and let things happen and play freely.

Golf, as we all know, is a funny game; if the putter behaves, you never know.

I feel like I am hitting the ball as well as I ever have so there are plenty of reasons to be optimistic.