Shane Lowry: Big topic is Zika virus and the Olympics 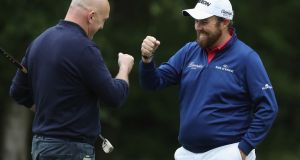 I’m obviously doing something right because I’ve been moved upstairs to the elite locker room here at Wentworth for the BMW PGA Championship, which is one of my favourite weeks of the season.

I love the place and the tournament. But it doesn’t matter where we are these days, whether we’re at Augusta or Sawgrass or The K Club, there’s no escaping one topic of conversation: the Zika virus and the Olympics.

Rory McIlroy saying what he said the other day is obviously not the first time I’ve been aware of the Zika virus. A number of golfers have already pulled out of the chance to compete at the Olympics – Adam Scott, Marc Leishman, Charl Schwartzel, Louis Oosthuizen – and I am sure there will be more.

I desperately want to go to the Olympics for Ireland. I am also a recently married man, and I have to learn a lot more about the virus. Obviously I really want to go, but there is a decision to be made. Can I or can’t I go?

I need to ask some questions. How big a percentage is the risk? That’s the really big one. I’m going to listen to the medical advice that comes my way, and, I’ll be honest, I’m not going to take any chances.

It has been on my mind for a few months; players have been talking about it a lot, and we talk to each other week to week when we’re out on tour.

It’s not an ideal scenario to have on golf’s return to the Olympics. Is it the pinnacle for golfers? I’m not sure. I think the Majors are probably the pinnacle. If I was a 800m or 200m runner there’d be no question about going because you’ve trained for four years, or even eight years in some cases, to get to the Olympics.

If there’s a decision to be made – and the qualifying date I know is July 17th – then it is going to be a very tough decision if I can’t go or if I don’t feel like I can go.

Right now I’m looking forward to contending in the BMW PGA here at Wentworth. I had great craic in the Pro-Am playing with rugby legends Keith Wood and Zinzan Brooke. Paul O’Connell was supposed to play but he was injured, so Michael Smurfit Jnr stepped in to good effect too as we won the team.

I grew up watching Keith, and always remember the try he scored off the lineout, that’s my biggest memory; and I heard from Brooke that he played Gaelic football, which was interesting.

It’s probably the best Pro-Am of the year, and it was also nice to bump into Paul Scholes. I’m a little bit of a Manchester United fan, but he’s one of the players that I’ve always put on a pedestal, so it was great to meet him.

This is one of my favourite tournaments of the year. I love the area, Sunningdale and Ascot. I’m in a comfort zone here. I feel confident here, and I suppose I’m lucky too that my caddie Dermot has been around here for 20 years and knows the course so well.

The first year I played here in 2010 we came over a week early. When you go to a new course you don’t know, you’ve got to look at a course map. Not here. I know if stand on the first and the wind is out of the right, that I hit a three-wood. I know playing that hole that it’ll be a nine-iron into the second, and that the third is going to be playing out of the right.

I feel like I’m playing okay and I’m comfortable here. It is important for me not to be complacent and to just let myself go about my business.

I do feel there is something big close. It is hard to know how close. I don’t feel like I am struggling, and there’s certainly no alarm bells ringing about my game.

Golf’s funny, and it is hard to moan about it. I feel like I am getting bad breaks and that’s the way I felt for a bit last year before I ended up winning the Bridgestone in Akron. I am just hoping it’s the same sort of trend this year. I know I am playing good enough to win. I just have to go and do it now.