Sergio Garcia back in contention at the BMW Masters

Shane Lowry had another disappointing round, carding a 74 in Shanghai 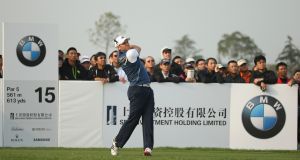 Sergio Garcia of Spain hits his tee-shot on the 15th hole during the third round of the BMW Masters at Lake Malaren Golf Club. Photograph: Andrew Redington/Getty Images

Sergio Garcia was delighted to haul himself back into contention for a 12th European Tour title in the BMW Masters in Shanghai on Saturday.

Garcia began the day three shots off the lead and was five off the pace with six holes to play after following birdies on the fifth and ninth with a “stupid” bogey on the 10th at Lake Malaren.

However, the 35-year-old Ryder Cup star then birdied four of his last six holes to card a third round of 67 and share second place on 14 under with overnight leader Lucas Bjerregaard and Byeong Hun An, one behind Thailand’s Thongchai Jaidee.

“My back nine didn’t start very well. I made a stupid, really, really soft bogey on 10 and then I guess got a couple good breaks on 13 and 14 and took advantage of it,” said Garcia, whose approach to the par-five 13th cleared the water by a matter of inches.

“I played the last four holes really well I think, so it was nice to be able to finish like that and give myself a shot tomorrow because I was getting a little bit far behind.”

Meanwhile Shane Lowry had another disappointing round, carding a 74 to follow yesterday’s 74 and leave him three over par overall. The Irish man hit double bogeys on both the ninth and 13th holes. Faring slightly better was Paul McGinley who carded a round of 73 after bogeys on the first and last two holes.

Garcia, who was fortunate to get a good lie in heavy rough after a wild tee shot on the 14th, added: “I knew that I was falling behind and I was hoping for something good to happen. I was fortunate that it did. So I’m happy with that and we’ll see what we can do tomorrow.

“It’s always exciting to be up there with a chance on Sunday. Hopefully I will play well tomorrow and keep myself up there and have a chance coming in and we’ll see what we can do.”

Jaidee wiped out his three-shot deficit to Bjerregaard in the space of six holes and took the lead with his fifth birdie of the day on the eighth, before picking up further shots on the 12th and 14th.

The 46-year-old former paratrooper was two clear when Bjerregaard bogeyed the 16th, but dropped his only shot of the day on the 18th after failing to get up and down from right of the green.

“It was tough on the third shot because you have to chip past the slope and the slope is only three or four yards from the pin,” Jaidee said. “I hit a good chip anyway and the putt missed, but it’s okay.

“Tomorrow is a very big day. If I play well like this and keep performing like this, I have a good chance.”

An is a candidate to be named European Tour rookie of the year after his victory in the BMW PGA Championship at Wentworth, but admits he faces stiff competition from India’s Anirban Lahiri — who has won twice this season — and British Masters winner Matt Fitzpatrick.

“It would be great to have it because it’s once in your lifetime,” the world number 47 said after a flawless 66. “I think it would be a bonus to be honest, and my goal is trying to stay in the top 50 in the world.”

Sweden’s Kristoffer Broberg is three shots off the lead after a sparkling 64 which featured an eagle and seven birdies in the space of 10 holes from the seventh, with Henrik Stenson, Paul Casey, Ian Poulter, Patrick Reed and Ross Fisher all on 12 under.

Poulter carded a third consecutive 68, despite missing from three feet for par on the 18th. “Played lovely again today,” Poulter wrote on Twitter. “Shame missed that tiddler on the last though. Game is good, mind is good.”

Belgium’s Thomas Pieters and Australian Marcus Fraser are 11 under after rounds of 63 and 65 respectively, Fraser holing his approach to the 18th from 231 yards for an eagle two and a back nine of just 29 shots.

With Rory McIlroy not competing, his rivals in the Race to Dubai have the chance to overtake the four-time major winner ahead of the season-ending DP World Tour Championship in Dubai next week.

England’s Danny Willett just needs to finish solo 28th or better in the 78-man field, while Lowry, Louis Oosthuizen and Rose must finish second or better and Branden Grace requires a win.

Rose is five off the lead in joint 13th after his second 67 of the week, with Oosthuizen seven under and Willett and Grace joint 27th on five under. Lowry is three over par after a 74.