Scottish venue is ideal spot to prepare for British Open

I love getting back to links golf. It’s different and it’s real. 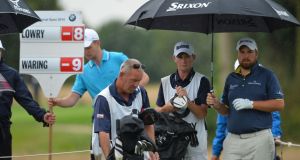 Shane Lowry shelters from the rain during the BMW International Open in Germany last month. “Lads, I’d rather be playing in the sun with no wind.” Photograph: Getty Images

My caddie Dermot Byrne went to Hoylake on Monday for a sneak preview ahead of next week’s British Open. On Tuesday, after playing a practice round here on this wonderful old links at Royal Aberdeen, we wondered why he had bothered to scout out the place.

“This is very, very similar . . . probably even a little bit harder,” he told me as we played the course, which makes the Scottish Open an ideal preparation for next week’s Major.

Of course, I’m not alone in believing playing links golf the week before the British Open is the way to go. The quality of the field at the Scottish Open is confirmation of that. I didn’t even get to play in yesterday’s pro-am – I was first reserve which meant being at the course at 6.30am until after 11am in case someone withdrew – which is only the second time all season that has happened. The other time was at the BMW PGA in Wentworth.

It’s great to get back playing links golf. I love it. I was playing a practice round on Tuesday with Damien McGrane and Peter Lawrie when Sam Torrance came by in a buggy. He was telling us this is the first European Tour event to be played at Royal Aberdeen which is surprising because it is a great golf course and it’s going to be very tough.

On a week like this you’ll always look at the advance forecast and, sure enough, the weathermen are predicting for the wind to blow hard off the North Sea. To be honest, I don’t mind if the weather is bad. I feel comfortable. Everyone says it to me. Whenever there is a bit of rain, I’ll get, “Sure you’ll love this weather.” And I’ll tell them, “Lads, I’d rather be playing in the sun with no wind.”

We’re very spoilt most weeks with the weather. It’s like that old Ben Hogan movie called Follow The Sun because the tour mainly takes us to sunny places. That’s why I love getting back to links golf. It’s different and it’s real. There are players who would nearly prefer not to be playing in wind and rain and on tough courses and some of them are beaten before they even go out.

From the time I stood on the first tee the other day, I loved this course here at Royal Aberdeen. Although I’ve got one eye on the British Open at Hoylake, and this will be great preparation, I’ve got to switch off from next week and concentrate on this tournament. All the old golf clichés come in. One shot at a time. Don’t get too far ahead of yourself. Before I know it, I will be down in Hoylake. But I’m trying to have a good week in Aberdeen and hopefully get four rounds in and to contend.

It’s great to play links golf with a card in your hand this week. It’s exciting and I love playing this type of golf. I stood on the first tee on Tuesday, looked down the fairway, and immediately liked the course. As I went around, I loved it. You have to see things a certain way when you’re playing links golf and I am seeing the shots that need to be played here.

Dermot told me it was harder if anything than Hoylake which makes me even more excited about the next couple of weeks. It is great playing links golf in back-to-back weeks and I believe it would be terrific if the Irish Open could be brought into the sequence to make for a links swing. I played with Kevin Stadler at the US Open last month and he was telling me he and his friends love coming to play golf in Ireland.

I took France off last week because it would have meant playing nine out of 10 weeks and that isn’t possible. After missing the cut at the Irish Open, I added the BMW International in Cologne to my schedule. I had to. I wanted to keep inside the top 20 on the Order of Merit before the cut-off for qualifying for the British Open – which I managed to do.

Going to Germany, I felt a bit flat. I didn’t really want to go there. I was disappointed with missing the cut by a shot at Fota Island. But I knew I had to go and to do well. The final round on Sunday was my most satisfying day. I’d bogeyed 16 and 17 in Saturday’s third round and went out on Sunday with a number in my head. Five-under. And I comfortably shot that. Coming home on the plane that night, I was thinking of what could have been, only losing the tournament by three.

Last week I spent a few days break in Kerry and came back to Dublin and played the Castle Golf Club on Sunday evening and Monday with my friend Dara Lernihan who was celebrating winning his first event on the Irish PGA Region (in Carton House last week) and also on passing his exams. Those greens in the Castle are as good as I’ve seen. Hopefully, they’ll have put me in the groove for the next couple of weeks.