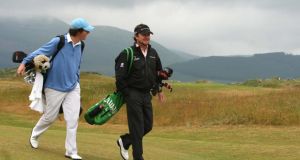 Rory McIlroy and Graeme McDowell enjoy a round of golf at Royal County Down.Photograph: Mark Pearce/Presseye/Inpho 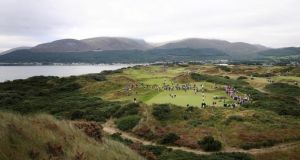 A view of wonderful links in Newcastle with a backdrop of Slieve Donard. Photograph: Inpho

Another iconic seaside course in Northern Ireland is to play host to the Irish Open in 2015. Royal County Down, the wonderful links in Newcastle with a backdrop of Slieve Donard, is set to be confirmed by the PGA European Tour as the site for the championship next year.

As a course, it is a very worthy choice, but its selection will come as a surprise, given the likely crowd restrictions. When the 2007 Walker Cup between Britain and Ireland against the United States was staged there, the crowds were limited to 10,000 a day with spectators allowed to walk the fairways as is tradition in the amateur match.

When the Irish Open was staged at Royal Portrush on the Causeway Coast in 2012, it was a sell-out with 112,000 attending over the four championship days. Such crowds won’t be possible at Royal County Down due to health and safety factors, but the establishment of a rota system involving courses in the North and the Republic – the event returned south to be staged at Carton House in Co Kildare last year and will be held at Fota Island in Cork this June – means that historic venues are again getting the opportunity to stage the championship.

Royal County, which last staged the Irish Open in 1939 when England’s Arthur Lees won, has consistently been judged among the top ranked courses in the world.

“Royal County Down is definitely one of my favourites in Ireland,” admitted former US Open champion Graeme McDowell. Speaking to BBC Northern Ireland, McDowell said: “There is always that internal debate in Northern Ireland which is the best? They are very different tracks, Portrush and County Down. County Down is an acquired taste, you have got to play it a few times to find your way around, with those blind tee shots, but the more and more you play it, the more you recognise it for the class place it is.”

Rory McIlroy also welcomed the anticipated move to bring the Irish Open to a course he knows like the back of his hand. “I think it was a huge success at Portrush and I think going to County Down can only be great for the Irish Open and for golf in Ireland in general,” said McIlroy. “In my opinion, it would be a good idea to alternate between a course in the south and one in the north every second year.”