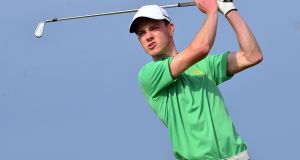 Rowan Lester: mastered the tough conditions in Lahinch to post a fine 72 in the first qualifying round. Photograph: Pat Cashman

Maybe it’s the fact that he now plays his golf in Jordan Spieth’s home state of Texas but there was something otherworldly about the resilience and mental strength displayed by Hermitage’s Rowan Lester in the wind and rain-lashed first qualifying round for the South of Ireland Amateur Open at Lahinch.

The 21-year-old, recently crowned North of Ireland champion, defied rain squalls and winds gusting up to 40mph to card an incredible level par 72 for a two-stroke lead over Tramore’s Robin Dawson and 19-year-old debutant Sean Desmond from Monkstown on a day when the average score was close to 82.

Now playing at Texas Wesleyan in Austin, Lester is bidding to become the first man since Darren Clarke in 1990 to win the “South” and the “North” in the same season and avenge last year’s defeat in the final here to Portmarnock’s Conor Purcell.

“I just took my chances when I had them,” said Lester, who made two double bogeys, two bogeys and three birdies in an outward half of three-over 39 and dropped another shot when a squall hit the 11th before picking up birdies at the 12th, 13th, 17th and 18th for his 72.

“I feel a bit more confident and feel good about my game after winning the North,” Lester said. “My chipping and putting has been really sharp. That was the key.”

Clarke’s 18-year old son Tyrone, who is making his debut in the championship, was thrilled to open with an 80 in his first competitive spin around the famous old links, confessing that his father had texted him before the off with some paternal words of wisdom.

“Dad just said that everybody is going to find it tough,” Clarke Jnr, a taller, blonder version of his father, said of his message from the 1990 champion.

“He said just keep going and there will be a birdie here and there and don’t get too upset.”

“I shot eight over and it feels like level par,” said Power after going out of bounds with his third and taking eight at the par-five 18th.

“I was two over with four to go and thinking that anything around 75 or 76 would be good.”

On a day when some players were hitting three irons into The Dell, Power added: “Coming in, if you hit a fairway it was almost a miracle. It must have been a five club wind.”