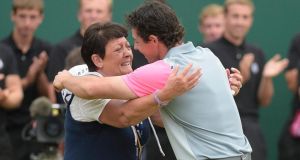 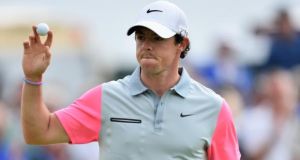 Rory McIlroy of Northern Ireland reacts to his birdie putt on the ninth green during the final round of The 143rd Open Championship at Royal Liverpool in Hoylake. Photograph: Stuart Franklin/Getty Images 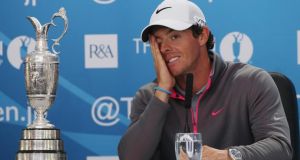 Rory McIlroy of Northern Ireland answers questions from the media after his two-stroke victory at The 143rd British Open at Royal Liverpool. Photograph: Andrew Redington/Getty Images

The ascent to greatness shouldn’t appear so natural. Yet, with each stride over this famous old links by the Dee estuary, Rory McIlroy moved effortlessly towards answering the call of his destiny; and, in claiming this 143rd British Open Championship in stunning wire-to-wire fashion, the 25-year-old Northern Irishman completed the third leg of a career Grand Slam.

Of all the Major championships, this one - the oldest and the greatest - is the hardest won.

In a final round played out in dry conditions with just a gentle wind to make players linger slightly longer than normal in considering club selection, McIlroy admittedly didn’t perform with the swagger of his opening three rounds. It was far from easy. But he took a leaf out of Tiger Woods’s book in making winning, rather than the manner of it, the most important thing of all.

In shooting a final round 71 for 271, 17-under-par, McIlroy finished with two strokes to spare over runners-up Rickie Fowler and Sergio Garcia.

Much of his round was spent listening to roars from ahead as Garcia made a fist of mounting a challenge. And, for 16 holes, McIlroy also had a spectator heckling him. On the 16th tee, McIlroy finally had enough of the interference when the spectator coughed on his downswing and he pointed out the perpetrator to a marshal. “I didn’t have him bothering me for the last two holes, which was nice,” admitted McIlroy.

As he had done throughout the championship, McIlroy used two trigger words. Afterwards, he revealed what they were - nothing too glamorous or earth-shattering: “process” and “spot”.

He explained: “With my long shots I wanted to stick to my process and to making good decisions, making good swings . . . and then spot was for my putting, just picking a spot on the green and trying to roll it over my spot each and every time.” Not rocket science, for sure, but it worked wonderfully.

In following some famous footsteps on this terrain - among them Bobby Jones, Fred Daly, the first Irishman to win a Major in 1947, and of course Woods himself in 2006 - McIlroy created some history of his own. In achieving a third career Major, he dedicated the win to his mother Rosie, who was on hand for a first time to witness her son win a Major. She had missed his US Open win at Congressional in 2011 and US PGA success at Kiawah Island in 2012.

McIlroy, in fact, confessed afterwards that spotting his mother by the back of the 18th green brought him to the verge of tears. “I was trying not to cry, because she was bawling her eyes out.”

In his deeds, McIlroy wasn’t quite so sentimental. He proved, again, that he possesses the fortitude for the fight and the ability to close the deal. In winning, McIlroy became the third youngest player of the modern era to win three different Majors. The others? Jack Nicklaus who was 23; Tiger Woods who was 24.

As a young boy growing up, learning his craft under the watchful eyes of his long-time coach Michael Bannon at Holywood Golf Club in north Down, McIlroy had always dreamed of winning a Claret Jug more than any of the other Majors. “I never dreamed of being at this point in my career so quickly. The Open championship was the one you really wanted growing up, the one you holed so many putts on the putting green to beat Tiger Woods, Sergio Garcia, Ernie Els, whatever.”

There was no need in the final round to hole a putt of any consequence on the 72nd hole, just a short tap-in for par. It was enough to give him the a third Major - bringing to fruition a bet placed by his father, Gerry, and some friends in his teenage years that he would win a Major before he was 26 - and brought to eight the number of Majors won by Irish golfers since Pádraig Harrington won his first Claret Jug at Carnoustie in 2007.

With three legs of the career Grand Slam, the only one missing is the Masters tournament. “I’ve really found my passion again for golf. Not that it ever dwindled, but it’s what I think about when I get up in the morning. It’s what I think about when I go to bed. I just want to be the best golfer that I can be . . . and I know if I can do that, then trophies like this are within my capability.”

McIlroy’s win - which moved him to number two in the world rankings - has reaffirmed his own belief that he can become the dominant figure in the game. “I want to be that person, the guy who goes on and wins Majors and wins Majors regularly. I’d love to be in that position.”

For now, the Claret Jug can join the US Open trophy and the US PGA’s Wannamaker Trophy on his curriculum vitae. Another step taken towards greatness.