Rory McIlroy scrambles to stay in contention at Sawgrass 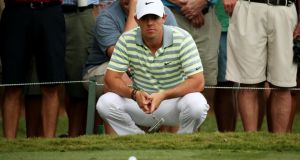 Rory McIlroy is four off the lead at the Players Championship after a second round 71 left him at four under par. Photograph: Getty

The fighting Irish seems an appropriate metaphor to describe the battling qualities of world number one Rory McIlroy (71), Graeme McDowell (70) and Padraig Harrington (73), all of whom negotiated a passage, albeit occasionally fraught, to the weekend in the Players Championship at TPC Sawgrass.

There is craft in graft, a trait admirably displayed by McIlroy, who scrambled to save pars, his game initially compromised by errant tee shots and misfiring irons but during his imperfect phase, he dropped just a single shot, a bogey at the sixth, where for once, the blade failed to save him.

The Northern Ireland golfer slowly recalibrated his game, finding a rhythm, and with it gradually clambered up the leader-board in pursuit of Jerry Kelly and Kevin Na, the Americans leading the way but with 38 players within half a dozen shots or so.

It started on the ninth, his third shot to the par five, a wedge, danced around the hole, to set up a straightforward birdie. Despite reaching the par five 11thin two shots, it was his putter that rescued a second birdie, when McIlroy holed from 11 feet. Another birdie followed at the 12th, when he coaxed a wedge into three feet.

The equilibrium had returned to his swing but conversely he just couldn’t convert on the greens, at odds with his putting on the front nine. A poor second shot to the 16th found water and he just failed to save a par, watching his 14-foot putt slide by. Chances on 17 and 18 went abegging on what was a frustrating day.

A slow start proved be a pandemic in an Irish context, Padraig Harrington, suffered a double bogey at the first and a bogey at the fifth but displayed character to play the remaining 13 holes in two under to make the cut on the mark of level par.

One shot better overall was Graeme McDowell on one under, after a 70; he bogeyed two of his first three holes but responded with four birdies and 12 pars. Shane Lowry, despite an opening birdie, had coughed up four shots to regulation figures by the turn and despite a gallant effort, two birdies on the way home, was still outside the cut mark.

Fans who congregate by the 17th and 18th holes to watch professionals squirm mentally and physically weren’t disappointed as the water’s siren call proved irresistible; not alone to golf balls but a club too, as Jonas Blixt relieved his frustration by tossing his driver into the lake after a wet tee shot.

A raccoon squared up to Robert Allenby and Billy Horschel was guilty of that professional malaise of not shouting fore, hitting a spectator with his tee shot on eight. Ian Poulter took time out from his excellent round to exchange words with a heckler, segmented by a little gesturing.

Spare a thought for Aaron Baddley. He ran up a quadruple bogey at the at the 17th, twice in the water, the 13th and 14th time he’s put a ball in the water there over the years.

Na may view his place at the top of the leaderboard as especially satisfying, almost cathartic in some respects, given the very public humiliation that he suffered during the 2012 staging of the Players Championship. He shot a final round 76 - he led the tournament on Saturday - but that disappointment was incidental compared to the mental torture.

The American struggled to pull the trigger to use the golfing vernacular. He waggled the club half a dozen times, stopped, took another practice swing and then added several more waggles. He was excoriated verbally by the fans. This after all was a player who had a reputation for being a slow player anyway, a virus in golf.

But even through the low times - he holds the record for most strokes on a par four, 16 at a tournament in Texas, four years ago - he managed to eke out decent results. Na’s eight under total at the halfway stage included 12 birdies. He explained: “I putted very well. When in trouble I made the par saves. I like the golf course. The short game is a key and it is a strong point in my game.”

Tiger Woods’ animated fist pump as he watched his nine-foot birdie putt disappear into the cup on the par five, ninth hole, his 18th was instructive on several levels. In a previous incarnation it would have been unthinkable that the 14-time major winner would celebrate a moment that simply guaranteed a place at the weekend.

But the former world number one is fighting an errant game, trying to reconstruct a golf swing under the guidance of Chris Como. Whatever about the physical peccadilloes, the one thing though that isn’t in doubt, is that Woods remains a competitor, par excellence.

He hit some dreadful shots in a first round 73 and yesterday also vacillated between the sublime and the abject in signing for a one under, 71 to leave him at level par for the tournament. His round was a microcosm of his travails, six birdies and five bogeys.