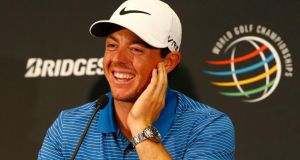 Rory McIlroy on Jack Nicklaus’s record: “It’s not something I ever thought about or dreamed of ... the next number in my head is four.” Photograph: Getty

Rory McIlroy wants to use his British Open triumph as a springboard to further success this season, but insists he has never thought about matching Jack Nicklaus’ record haul of major titles.

McIlroy’s win at Royal Liverpool earlier this month made him just the third player after Nicklaus and Tiger Woods to win three majors by the age of 25.

And although the Northern Irishman would love to win a second US PGA title next week before trying to complete a career Grand Slam in next year’s Masters, Nicklaus’ tally of 18 major titles is not on his mind.

“It’s not something I ever thought about or dreamed of,” McIlroy told a pre-tournament press conference ahead of the WGC-Bridgestone Invitational on Tuesday. “The next number in my head is four.

“I’ve won three and would like to win my fourth and just try and keep going like that, one after the other and whatever number it adds up to at the end of my career is great. I don’t want to put that pressure on myself, that burden of a number to try and attain.

“You need goals but that’s too much of a long-term goal, I like to set shorter-term goals because all those little ones will help you achieve the long-term goal in the end.

“I know how many majors the greats of the game have won but I never wanted to compare myself. At least at the end of my career there’s not going to be a disappointment ‘Oh, I wanted to get to 15 but I only got 12. Bummer!”’

McIlroy can reclaim top spot in the world rankings for the first time since March last year with a victory at Firestone Country Club, before turning his attention to the final major of the year at Valhalla.

“This course is going to set up well for me this week,” added McIlroy, who revealed he had taken pictures of the Claret Jug in various places, even “on top of the toilet.”

“It’s a long course anyway and it’s playing just that bit longer with all the rain they’ve had. It’s a course that I’ve done pretty well on before and I feel comfortable on. Valhalla should set up well for me so I can definitely have a chance.

“World number one is a big goal of mine and I’ve never won a World Golf Championship. That’s another thing I’d like to knock off the list.

“I think every time you have success you have to reassess your goals. It’s two-thirds through the season and a lot of the goals I set for myself at the start of the year I have already achieved so that’s when you have to reassess, celebrate that for a couple of days but then move on, keep moving forward and thinking about what you want to achieve.

“At the end of the year you can really reflect on everything you’ve done and enjoy it. I feel like I have a lot of momentum and I can carry that through to the end of the year and hopefully ride that and play some golf similar to what you saw at Hoylake.”

Victory at Hoylake also took McIlroy top of the Ryder Cup qualification standings, but the 25-year-old does not think his Senior Open counterpart should join him on the team at Gleneagles.

Bernhard Langer’s record 13-shot win at Royal Porthcawl has led to speculation the 56-year-old could be considered as a wild card by captain Paul McGinley, but McIlroy said: “I think the team dynamic is pretty good at the minute with the mix that we’ve got and to bring someone in that hasn’t spent much time around us mightn’t be the best.

“He’s not playing against the regular guys week in and week out but he’s playing great golf obviously and what he’s done this year, and Monty [Colin Montgomerie, who has won two senior majors in 2014] as well has been fantastic. If they were to be involved as vice-captains or something then I’d be all for that, but I don’t think they should be on the team.”

1 America at Large: On Long Island, longing for a return to our field of dreams
2 ‘For 25 minutes I ran out of oxygen’: Pepe Reina on his coronavirus battle
3 Dr Claire Molloy: ‘It is a privileged place to be, on the frontline’
4 ‘This is sick’ - seventh-tier Swedish club cancels friendly after betting mayhem
5 Woods and Mickelson to play coronavirus relief match – reports
Real news has value SUBSCRIBE