Rory McIlroy gets ready to pounce at Turkish Airlines Open 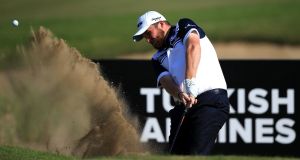 Shane Lowry: the Offaly man is seeking to improve on his fifth place in the Race to Dubai standings at the Turkish Airlines Open. Photograph: Jan Kruger/Getty Images

In just over a fortnight, the world’s political leaders will gather here in Antalya for the G20 Summit. Those politicos will naturally have far weightier issues to deal with than the golfers in the Turkish Airlines Open on The Montgomerie have faced. And yet, as South African Jaco van Zyl continued to set the pace, there was a discernible raising of the stakes by those in pursuit, not least the lurking presence of Rory McIlroy.

McIlroy’s demeanour after a second, successive bogey-free 67 for 134, leaving him 10 under par and four shots adrift of the South African at the half-way stage, was one of someone knowing he was only cranking up the machine. The Northern Irish man talked of his “solid” play and of how “comfortable” he felt. Then, he said: “I definitely feel like there’s a 62 or 63 out there for me.”

If Van Zyl weren’t already glancing over his shoulder, he is in no doubt of McIlroy’s intent to chase him down. No political shenanigans from Mr McIlroy, just a desire to let his clubs do the talking.

For Shane Lowry, though, there was an amount of frustration and also, at the end, a little relief. The 28-year-old Offaly man rescued a 70 (for 138) from an indifferent round with a two-putt birdie on the 18th.

“I’m glad I got out of jail today with two under . . . it could have been worse. It just wasn’t meant to be today. That’s golf. It’s a funny game sometimes. It felt easy for me the last while and today it felt a little bit harder,” said Lowry, who retreated to the range to work out the solution.“I think I will need to shoot a double-figure weekend but it is not like I haven’t done that in the past. So there is no reason why not.”

Lowry is seeking to improve on his fifth place in the Race to Dubai standings and has committed to playing all four of the “Final Series” run-in.

One of those who also made the most of the conditions was Graeme McDowell, who shot a 65 for 135, nine-under, to move up 20 places into tied-eighth. In what has been a disappointing season so far, McDowell said it was “probably” the best he had played scoring-wise all year. In fact, it matched his second round 65 from Dubai back in January, when he last had a top-10 finish on tour.

“I am really trying to look at the big picture at the minute. I am not out there as I was for most of the year feeling like I had a gun pointed to my head and it was me pointing the gun,” McDowell said.

“I put myself under far too much pressure going into the summer because I hadn’t played well and I am not the type of guy who reacts well to that. I am the kind of guy who needs to be out there very relaxed and very open-minded and very big picture-orientated, and I think I have got a little too focused on the bad stuff this year and got a little too frustrated playing golf like I needed it too badly. I am feeling very relaxed on the golf course, enjoying what I am doing and really looking into next season.”

McIlroy yet again provided proof that, even without being on top form, he could operate in cruise control. The strong impression remained that he was ready and able to click up the gears for the business part of the tournament over the weekend.

If there were times when McIlroy rode his luck – such as on the par 5 fourth where his tee shot struck a tree and prevented the ball from entering the water hazard – there were other times his escapology was masterful, like on the 18th where he took a penalty drop from a bush following a pulled tee shot and successfully managed to keep a bogey off his card. “That was nice,” he said.

“I definitely feel like there’s more to come. If I can just be a little more clinical with my wedge play, I think I’ll have a really good chance over the weekend,” he said.

“If I get myself up there, I feel like I’ve had a lot more experience than some of the guys up there on the leaderboard in closing tournaments out, so I’d back myself.”

1 Avoid the treadmill at all costs – marathon training in the 2km radius
2 Sonia O’Sullivan: Taming The Tan gave us one last roll of the dice before shutdown
3 Rich Premier League clubs way off the mark in cutting staff pay
4 Reality Bites – Tales from the new normal: Shane O’Donnell
5 ‘NRL Island’ being considered in Australia to continue season
Real news has value SUBSCRIBE