Holywood star feels first Major is the most open in years, with 70 players capable of winning 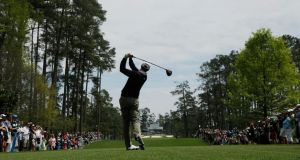 The numbers game. Adam Scott, the master with the newest champion’s locker, felt there were 20 players capable of winning the green jacket in this 78th edition of the US Masters; Rory McIlroy, the pretender to the throne, believed the number was as high as 70. What neither really needed to expand on here at Augusta National yesterday was that each believed they would be among that number. That was a given.

“It’s probably the most anticipated week of the (golfing) year,” admitted McIlroy, with almost giddy excitement. He may be a hardened two-time Major winner still shy of his 25th birthday, with whatever scars were inflicted on him in his final round demise of 2011 by now healed with the passing of time, but there is a spark back in the Ulsterman that exudes promise.

Having confined himself to just a few shots, mainly out of bunkers, in the practice area on Monday, McIlroy’s preparations yesterday stepped up a gear. On the suggestion of his caddie JP Fitzgerald, he invited the US Open amateur champion – the young Englishman, Matt Fitzpatrick – to join him, and, by the end, he had also teamed-up with Patrick Reed. When they finished, McIlroy and Reed discovered they would be in the same three-ball for the opening two days of competition.

Players around the world have been playing for millions and millions of greenbacks – be they dollars or euro – since the season started at the tail-end of last year but, as McIlroy acknowledged, the Masters really propels golf on to a new, higher level. “You’ve sort of got the Major season starting at Augusta in April and ending at the (US) PGA in August,” he said. Not only that, but McIlroy’s contention that it is the most “anticipated” week of all was due to the time factor. As he put it, “it’s been eight months since we’ve had a Major; it’s Augusta!”

Big enough
So, we’re here. Now. And no Tiger. McIlroy may have dropped down to ninth in the latest world rankings but there is no denying he is one of those few players big enough to fill Woods’s shoes.

“The Tiger effect on golf has been huge from the mid ‘90s up until now,” said McIlroy, adding: “I think any sport benefits from a dominant figure like that to not really drive the game forward, but to maybe be the legend like LeBron James, for example, at the minute, in basketball, or Cristiano Ronaldo in football or Messi. It’s been Roger Federer, Rafael Nadal in tennis, people like that, people that win on a regular basis and people you can sort of look up to as heroes.”

When he was asked if he felt a little “uncomfortable” with being a similar dominant figure, or if there were something in the Irish psyche that prevented him from going there, McIlroy responded: “Am I uncomfortable with that position? No, I’m not. Did it take me a while to come to terms with it? Yes, because it’s not something you ever thought starting out your career you were going to have to deal with or handle.

“If you’re in that position, then you’re one of the top players in your sport. I’m certainly not at their level in terms of their sports,” said McIlroy, referring to Ronaldo, Federer et al, “but I’m working there and I’m trying to get there. So I don’t think there is anything in my psyche that prevents me from doing that. I don’t think it’s in the Irish people’s psyche, either. There’s been a lot of great Irish people that have done a lot of great things. So, no, I’m not uncomfortable, but it took me a while to come to terms with it, yes.”

Feel-good factor
McIlroy has not won since the Australian Open last November but he has carefully choreographed his season. He has two runners-up finishes, and a closing round 65 on Sunday in Houston for a feel-good factor. He is fit and strong. When the weather turned on Monday, it meant two sessions in the gym instead of one.

While there, he bumped into the All-Black Dan Carter.

Yesterday, his mind was back on golf. On believing up to 70 of the 97 players teeing up can actually win this week. “There’s obviously a few past champions that play that might not be able to compete, there might be a few first-timers or a few amateurs that won’t compete. But then you’ve got the rest . . . a lot of guys that can win, a lot of guys that have won PGA Tour events.

“The thing that I like, because it’s the Masters and because it’s so big or hyped up or whatever you want to say, you ought to remember that you are still playing against the same guys you play with week-in, week-out. So I’ve beaten them before. They have beaten me before.

“That’s why I’m saying, there’s so many guys here this week that will feel like they have a chance to win.”

1 Owen Doyle: Creeping professionalism of schools rugby a threat to the game
2 Niall Quinn happy to step into the breach at FAI
3 McNamara outlines the scale of opportunity for Ireland’s U-20s
4 Cox calls for a more relaxed transfer regime in the GAA
5 Officials and referees brace themselves as new GAA rules kick in
Real news has value SUBSCRIBE