Rory McIlroy emerges from fog to end second round in style 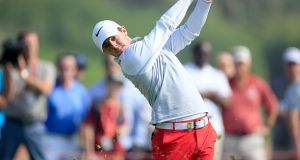 Rory McIlroy ended his delayed second round in Abu Dhabi with a birdie and eagle to sit two shots off the lead. Photograph: Getty

World number three Rory McIlroy made up for more lost time with a spectacular finish to his second round in the Abu Dhabi HSBC Championship on Saturday.

A fog delay of two hours and 45 minutes on Friday had seen round two spill into Saturday, only for the early resumption to be delayed by two hours and 50 minutes as more mist descended on Abu Dhabi Golf Club.

McIlroy had been one over par for 13 holes on Friday and looked set for more frustration after missing early birdie chances, but then almost holed his approach to the last two holes to leave tap-ins for a birdie and an eagle.

“I needed that,” McIlroy said after signing for a 70 to finish eight under par, two behind clubhouse leader Andy Sullivan, who finished second to McIlroy after a last-round duel in the DP World Tour Championship last November. “I could not hole a putt from outside two feet so I thought I would hit a couple inside two feet!

“I said to JP (Fitzgerald, his caddie) on the 17th tee ‘Let’s finish three, three so I don’t know if I should say I need 18 threes on the first tee. I knew 18 was a good chance and 17 was downwind so I’d be going in with a wedge, but I didn’t quite expect to do what I did on 18. That was nice.

“It glossed over a pretty average round to be fair. But when you are not at your best, to be able to come away with a 70 and keep in touch with the leaders, I’m happy with that.”

McIlroy, whose 268-yard five-wood approach to the 18th appeared to graze the edge of the hole, added: “I’ve never had an albatross and my dad’s had one or two so that would have been nice.”

American amateur Bryson DeChambeau finished alongside McIlroy after adding a 72 to his opening 64, with world number five Henrik Stenson part of a seven-strong group on seven under.

Stenson was delighted to fire a hat-trick of birdies from the 15th to post a battling 72, but the effort came at a price for the 39-year-old Swede.

“It’s been a struggle,” said Stenson, who had keyhole surgery on his right knee on December 9th. “Not so much for the knee; it’s getting a bit swollen from playing golf and walking, but the foot is taking a lot of strain. So I feel like I’ve done about a thousand toe-ups.

“I’ve decided to not push that any further and take a rest for next week. Unfortunately I have to pull out of the Qatar Masters and get some rest and rehab and hopefully we can push on from there.”

Speaking about his round, Stenson added: “I played horrendous on the front nine yesterday and I was scrambling for three over, so that could have been a lot worse but not any better.

“I was out there in the fog for an hour and a half with Pete (Cowen, his coach) this morning working away on some stuff and obviously that worked a little bit better than what I was doing yesterday.”

Rickie Fowler’s finish was not quite as spectacular as that of playing partner McIlroy, although the world number six did clatter the flag with his approach to the 16th and also birdied the 18th to finish six under.

In contrast, the final member of the marquee group, world number one Jordan Spieth — who was 30 under par in winning the Tournament of Champions by eight shots a fortnight ago — cut a frustrated figure as he finished with five straight pars to card a 73 and finish three under.

Tipperary have 20 points to spare as they claim first win of 2020 16:55
Kerry keep Royals at bay 16:52
Wolves make light work of dismal Norwich 16:34
Limerick’s scoring threat on full view as they close in on semi-finals 16:57
Fernandes inspires Man United past Watford and up to fifth 16:25
Here is your handy guide to sport on television this week