Robert Garrigus leads Valspar by one

Dubliner Pádraig Harrington four over after a 72, one ahead of Darren Clarke, who shot a 73 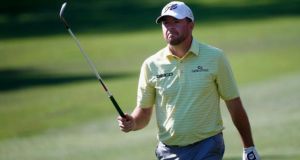 Robert Garrigus held a one-shot lead after the third round in the Valspar Championship at Innisbrook Resort and Golf Club in Palm Harbor, Florida. Photograph: Sam Greenwood/Getty Images

Robert Garrigus just about held on to the lead after the third round of the at the Valspar Championship on Saturday.

The 36-year-old American, whose sole victory on the PGA Tour came in 2010, began his round well with birdies on the first, second and fifth holes, but suffered two bogeys on the back nine for a third-round 70 to take a one-shot lead into the final day.

Garrigus, who led by three shots at the halfway stage, saw his lead reduced by two shots after Kevin Na carded 68 - to match his second-round score - and move to seven under par at the Innisbrook Resort in Palm Harbor, Florida.

Garrigus’s nearest contender claimed four birdies and a bogey, the 30-year-old looking for his second win on the PGA Tour. One shot further back was Australia’s John Senden, who moved up the table into third after carding an impressive 64, with seven birdies in a flawless round taking him seven under on the day and six under overall.

England’s Justin Rose, who shared a four-way tie for third at the halfway stage, remained in contention three shots off the lead as he claimed three birdies, before a bogey on the 18th marked his third-round card of 69.

Compatriot Luke Donald was two shots further back in a three-way tie for eighth alongside American Jason Kokrak and Matteo Manassero of Italy after the 36-year-old Englishman carded 67, recording two birdies on the front nine and two more on the back nine in a flawless round.

While South Africa’s Retief Goosen also impressed with a third-round 64 to move into contention as he sits four shots off the lead after saving shots on the seventh, eighth, ninth, 12th, 13th, 16th and 17th holes.

Alongside Goosen on four under par were Americans Charley Hoffman and Scott Langley.

Veteran American Jim Furyk dropped to two under par in an eight-way tie for 11th following a third-round 71 which included three birdies and three bogeys.

Dubliner Pádraig Harrington was four over after a 72, one ahead of Darren Clarke, who shot a 73.