R&A confirm Open final round to take place on Monday

Second round play will recommence after 4pm with round three tomorrow 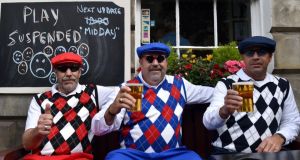 Play will resume at St Andrews shortly after 4pm with a Monday finish in store for only the secon time in Open Championship history. Photo: Owen Humphreys/PA

The final round of the Open Championship will be played on Monday for just the second time in its history after long delays caused by high winds and heavy rain.

Governing body the R&A announced the move as summer storms in Scotland hit the tournament in St Andrews, Fife, and caused flash flooding in parts of Perthshire.

Play was suspended for a second time at the 144th Open this morning with wind gusts of 45mph recorded on the course.

Yesterday, heavy rain halted play meaning some of the world’s best golfers remained on the course until almost 10pm on Friday and are still to complete their second round.

The R&A made the decision to extend the event into a fifth day with the plan to finish round two on Saturday, and the third and fourth rounds to follow on Sunday and Monday.

The only time the Open has previously been extended to Monday was when rain severely affected the 1988 event at Royal Lytham, where Seve Ballesteros went on to claim his third Claret Jug.

”The forecasts predict a drop in wind speeds between 3 & 4pm. Play is expected to resume at 4pm, providing acceptable wind speeds.

”An announcement regarding Saturday and Monday tickets will be made shortly.”

The conditions have frustrated some of the leading contenders in the tournament with Masters and US Open winner Jordan Spieth swiping his club in the air after missing a putt that seemed to be held up in the wind.

TV cameras later showed the American telling playing partner Dustin Johnson and a tournament official: ”We should never even have started.”

Some fans who have had bought tickets for Sunday, expecting to see the final stages of the tournament, were unhappy.

One Twitter user wrote: “A disgrace. Paid high price for reserved 18 hole seats on the last day. Not the second last.”

Another user, Dave Walker, wrote: “Absolute disgrace! Us amateurs putt on all sorts, tell the overpaid professionals to get on with it!”

The tournament has been caught up in a summer storm sweeping Scotland.

Flash-flooding left hundreds of homes without power in Perthshire yesterday, with dozens of properties in the village of Alyth evacuated and several motorists rescued from their vehicles as water rushed down the streets.

Some cars were left piled on top of each other in the village when the water cleared.

While campers at an island music festival also had to be evacuated because of high winds last night.

People at the Tiree Music Festival were sheltered in schools, the island airport and homes on the Hebridean island but organisers said the festival will resume today.

A number of flood warnings had been in place in Tayside, Perthshire and Aberdeenshire for today but most have now been removed as the worst of the heavy rain seems to have cleared.

The Met Office had issued yellow ”be aware” warnings for rain in Perth and Kinross and Stirling regions and much of western Scotland today.The persistent and sometimes heavy rain is expected to be accompanied by strong winds and the warning is valid until around 1pm, the Met Office said.

A spokesman said: ”Along east and west coasts of Scotland there will be gale force winds in exposed areas with gusts of wind reaching 55mph in some places, but more widely 35 to 45mph inland.

”They will ease into the afternoon but the public should be aware of possible minor impacts to transport and travel, resulting from either wind or rain, the latter not helped by the fact that the ground is saturated.”