Plenty of ups and downs beckon at Augusta 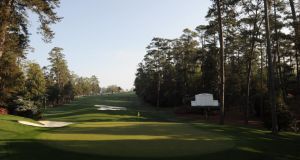 The tenth green at Augusta National Golf Club in Georgia which once again hosts the US Masters next week. Photo: Harry How/Getty Images

It doesn’t come across on television, even with the advent of high definition images, but the impact – regardless of being a first-timer or a seasoned visitor – upon going through the entrance gates of Augusta National Golf Club, walking by the merchandise area and finally coming to the first fairway, is spine-chilling and sufficient to stop you in your tracks.

Before you is the dramatically undulating terrain on which this course is built. Flat, it isn’t!

The most visual impact, indeed, is upon looking down from behind the ninth green in a number of directions.

Down to the ninth fairway itself, where the player must contemplate an approach to the elevated green; or, down the hill towards the back of the second green, an area massed with spectators who, like the grand old Duke of York’s soldiers, are either coming up or going down.

The elevations are most dramatically experienced on the downhill 10th, the 11th and the 18th. On the 10th, the hole known as Camelia (which proved to be Rory McIlroy’s downfall in 2011 in the final round) the drop is the most dramatic on the course and falls some 100 feet in height from the tee to the green.

Flora and fauna
As Mark O’Meara once put it, “on TV, the course sort of looks flat . . . you get there and the course just startles your eyes. The change in elevation is simply dramatic.”

The topography of the landscape is one of hills and more hills, with holes moving one way and the other and aesthetically defined by an array of flora and fauna. The drop from the highest point on the course (the first green), to the lowest, at Rae’s Creek (guarding the 12th green) is 175 feet, which mightn’t sound too dramatic. The Eiffel Tower, for instance, is 1,063 feet and the Statue of Liberty is 305 feet. Still and all, the visual impact of the drop in elevation is immense.

The course was designed in the early 1930s by Bobby Jones, who had the vision to transform the orchard into a golf course, and legendary architect Alister MacKenzie. They drew inspiration from the old course at St Andrews, most notably in the Valley of Sin that falls away from the 14th green, and in the humps and hollows of the fairways. The upshot is that players have sloping lies on the fairways, and the spectators have wonderfully natural vantage points from which to watch the drama unfold.

Fittingly, perhaps, one of those holes with the more dramatic drop in elevation has traditionally been the hardest.

Last year, it was ranked eighth most difficult on the course, averaging 4.20 shots.

Back nine
The statistics built up over the years confirm what we all suspect: the sequence of holes that start the back nine are, when it comes to getting the ball in the hole, the most toughest of all.

The 10th, 11th and 12th holes are, in turn, ranked the first-, second- and third-most difficult holes on the course.

Ironically, when you ask the players to nominate the hardest shots on the course, the mindset doesn’t match the statistics.

Although the numbers game will tell us that the Par 5 15th is the easiest hole on the course, Matt Kuchar – among others – nominates the second shot in there as the hardest to pull off.

“I think even if you lay up, that approach shot into 15 is one of the hardest. I think even from a wedge distance, it’s a hard shot. You’re on a downslope that pitches with the ball above your feet but, (if) you take that back to 220 yards, 250 yards, trying to judge the distance with that much downhill with water in front and water in back . . . . I think the approach into 15 is probably the hardest,” insisted Kuchar.

Adam Scott, who ended the Australian drought in this Major when he won the green jacket a year ago, is on Kuchar’s side. “Yeah, I think potentially a pitch into the 15th hole is a very, very difficult shot . . . . later in the round, if you had that shot on Sunday, that would be a very difficult shot.”

If that potential shot on the 15th is deemed by Scott to be the most difficult, he also goes against the grain in nominating his toughest. No, not the 10th; nor the 11th, statistically the two most difficult. Scott makes the point that the first is the toughest because tension comes into play. “We build up the nerves before we go to the tee on Thursday or any round, and it’s just a difficult golf hole.

“It demands a lot out of the drive and quite a long second shot up the hill to a very severe green. When you’re trying to gather your thoughts and get composed out there, it asks a lot of you,” said Scott.

White-knuckle ride
Scott added: “On the first you’re just trying to hit the middle of the green, and not at the pin, and it goes on and on for 18 holes and that’s what makes this course special.”

That run from the 10th down to Amen Corner might be akin to a white-knuckle ride, but Ian Poulter feels it’s the front nine that has the capacity to make-or-break a round.

“You’ve got the holes that I think are difficult holes and holes that I play or in the past have played not as well as I would have liked to. Those holes for me personally are at 5 and 7; 1, 5, and 7 for me are pretty key. If I can get through those holes, then I feel like the course can open up,” claimed Poulter.

The dramatic elevations in the topography around Augusta National is an integral part of its appeal, but it is the smaller hills – those on the super-slick greens – that provide the most devilment.

1 Gordon D’Arcy: Digging deep only recipe for Twickenham success
2 Robbie Henshaw and Bundee Aki to lead from the centre
3 Kieran Donaghy calls for GAA to shut down fans’ forums
4 Jurgen Klopp: ‘welcome to Anfield, it’s not over yet’
5 Seán Moran: GAA in trouble if sectional interests not accountable to rules
Real news has value SUBSCRIBE