Peter Lawrie and Graeme McDowell off the pace in Malaysia 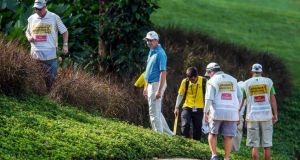 Peter Larwie searches for his ball during his four over par third round in the Malaysian Open. (Photograph: EPA/AZHAR RAHIM)

Peter Lawrie slipped down the leaderboard at the MalaysianOpen after he shot a four over par 76 in his third round.

Dubliner Lawrie starter poorly with back-to-back bogeys but had picked up two shots by the time he reached the fifth, however he failed to gather any real momentum and he now sits at four under for the tournament.

World number 20 Graeme McDowell is a shot better off at five under after he made par third time out, however he is 12 shots off the lead of Austrian Bernd Wiesberger.

Wiesberger will take a two-shot lead into the final round after firing the lowest score of his European Tour career at the Kuala Lumpur Golf & Country Club on Saturday.

Wiesberger, who had top-six finishes in the three Desert Swing events, continued his rich vein of form and birdied the first five holes in a sparkling 63 to lead Spaniard Alejandro Canizares (68) by two shots at 17-under 199.

“I caught up with the leaders early, which was good, and finished off well,” said Wiesberger who finished the penultimate round with a hat-trick of birdies.

“It was a great day for me. This is my European Tour record - I’ve never shot a 63,” said the 29-year-old, seeking his third European Tour title and first since 2012.

“If I keep playing like this then I have a good chance to take this home, but tomorrow is another day and anything can happen. I’ll try and rest it up and give myself a chance on Sunday.”

Canizares bogeyed the sixth hole to surrender lead and had an eagle-birdie-bogey finish to his round.

“It was fun, playing alongside these guys is always fun,” he said. “I made more mistakes than the previous days but I’m quite happy I made a two on 16 with a wedge.

“Hopefully, tomorrow, I have the same fun. It’s always good to play with someone who is playing well as he’s pulling you to make birdies as well. It was fun to watch, he played great. He kept me going and kept me pushing.”

Defending champion Lee Westwood birdied the last two holes for a 69 to lie one shot behind Canizares and India’s Anirban Lahiri fired 10 unanswered birdies in the day’s lowest round of 62 to lie fifth on 12 under.