Paul Waring the surprise leader after first round of French Open

Graeme McDowell opens with a 69, Paul Dunne shoots a 70 and Shane Lowry 74 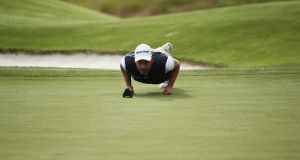 Paul Waring, who shot a 64, lines up a putt during day one of the HNA Open de France at Le Golf National in Paris. Photograph: Jan Kruger/Getty Images

England’s Paul Waring left some of Europe’s biggest names trailing in his wake to claim the lead after the first round of the HNA Open de France.

Waring, 32, who is competing this season on a medical exemption due to ongoing back problems which restricted him to four starts in 2016, carded seven birdies in a flawless opening 64 at Le Golf National, venue for the 2018 Ryder Cup.

Pieters, who won a record four points from five matches on his Ryder Cup debut at Hazeltine, carded six birdies and a solitary bogey in his 66 after benefiting from a putting lesson from the coach of fellow Belgian Thomas Detry.

“I did some good work on Sunday with Thomas Detry’s putting coach and he made a bunch of putts last week so I figured he’s good,” Pieters told Sky Sports.

“It was about visualising and I definitely saw the ball go in the hole before I hit it and hit plenty of good putts. I’ve been a feel putter my whole life and to get one little tip on seeing those putts go in really helped me.

“Any time I hit a green today I felt like I had a good chance to make birdie so I’m very happy.”

Kimsey, who won the qualifying school last year after coming through all three stages, recovered from a bogey on his opening hole – the 10th – to card five birdies in the next six on his way to a 66, which matched Bjork’s flawless effort.

“It’s definitely up there as one of the best rounds of the season,” said Kimsey, who has missed the cut in nine of his 13 events in 2017.

“I’ve watched a lot on TV over the years, so obviously sort of knew the reputation of the golf course and how tough it was. Coming here for the first time, you’re just trying to feel your way around and not get into too much trouble out there.”

Fleetwood, who followed his fourth place in the US Open with a tie for sixth in last week’s BMW International Open, carded four birdies in a flawless 67 to share fifth place with American Peter Uihlein and Germany’s Florian Fritsch.

The 26-year-old from Southport, who won his second European Tour title in Abu Dhabi in January, was a lowly 188th in the world rankings last September, but has reaped the rewards of returning to his former coach Alan Thompson, who was rewarded with an emotional first trip to the Masters in April.

“I think it’s the one thing that he’s always wanted to do,” Fleetwood, who is now ranked 21st, said. “It was a big deal.

“We drove in on Sunday or Monday morning and Magnolia Lane didn’t really bother him. We were just chatting away and then as soon as we got out of the car he said ‘You’re going to have to leave me alone’ and went off somewhere just to have a moment to himself.

“He’s been great for me, we’ve been doing really good work and my swing’s in the best place it’s ever been. We get on great and he’s a brilliant coach.”

Former champions Martin Kaymer and Graeme McDowell posted rounds of two under 69, while Rahm birdied his final hole to finish one under. Paul Dunne was one shot behind McDowell after an opening 70 but Shane Lowry struggled in a round of 74 while Darren Clarke brought up the field on 84.

Former Barcelona president Bartomeu arrested after club offices raided 12:41
Echoes of Berlin 1936 . . . Should Beijing Winter Olympics be boycotted? 10:01
The Offload: Ireland women must be allowed to move with the times 10:00
Tiger Woods touched by red and black tribute by fellow players 08:52
England prop receives death threats for not clapping Wales off the pitch 08:29
Here is your handy guide to sport on television this week