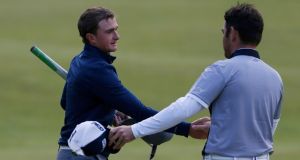 Paul Dunne and Louis Oosthuizen both have a share of the British Open heading into the final day at St Andrews. Photograph: Reuters

Jordan Spieth’s bid for the third leg of an unprecedented calendar grand slam remained firmly on track in the 144th Open Championship at St Andrews.

But the Masters and US Open champion was set to face a large number of challengers in Monday’s delayed final round, including 22-year-old Irish amateur Paul Dunne, who was mistaken for Spieth by autograph-seeking fans this week.

Dunne followed impressive back-to-back 69s with a flawless round of 66 on the fourth day at St Andrews in just his second Open appearance.

Having reached the turn in 32, the 22-year-old Greystones member continued his momentum on the back nine on a day when most of the leaders made hay.

Starting the day five shots behind overnight leader Dustin Johnson, Spieth carded seven birdies and one bogey in a third-round 66 to claim the clubhouse lead from three-time major winner Padraig Harrington, who had earlier completed a flawless 65.

“I always wanted to shoot 65 on Sunday at an Open. Unfortunately there’s another round to go,” Harrington joked in reference to the weather delays which mean the championship will finish on Monday for just the second time.

At 11 under par Spieth was one shot ahead of Harrington but one behind England’s Danny Willett, who was in the final group and had birdied the fifth, ninth and 10th to claim the outright lead.

Dunne was also 11 under with Australia’s Jason Day, while Harrington was joined on 10 under by Retief Goosen, Adam Scott and 2010 champion Louis Oosthuizen.

Johnson and his namesake Zach were the only two players on the course yet to record a birdie, Dustin also dropping a shot on the seventh after duffing his approach to the green.

Australia’s Marc Leishman had set the early clubhouse target on nine under after a flawless 64, but that was never going to hold up as the players took advantage of calm conditions on a course softened by overnight rain and a brief downpour at 12:30pm.

Leishman needed to play the last three holes in two under to shoot the first 62 in major championship history — there have been 26 rounds of 63 — but the 31-year-old narrowly missed good chances on the 16th and 17th before his approach to the 18th span back into the Valley of Sin.

The lead was changing hands with amazing regularity and Dunne moved back alongside Willett with a birdie on the 15th, before Willett drove out of bounds on the 14th.

The world number 39 walked off the tee thinking his tee shot was going to find the right-hand side of the fairway before being told the bad news, but did well to scramble a bogey and drop to 10 under.

Dunne completed a flawless 66 to be 12 under and was joined in the clubhouse lead by Oosthuizen, who birdied the last for a 67.

Burnley hold on for a point to leave Arsenal stuck in 10th 14:54
Owen Doyle: Culture of ‘clip memory’ among modern referees not cutting it on the pitch 13:30
European Indoors: Sarah Lavin and Sean Tobin clock lifetime bests to advance 13:20
Lions tour will not take place in Australia this summer 11:39
England all in a spin once again as India seal the series 11:00
Here is your handy guide to sport on television this week