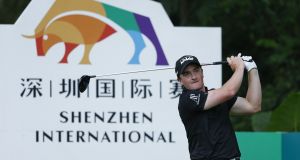 Paul Dunne shot an opening round 68 at the Shenzhen International. Photograph: Getty

Paul Dunne is two shots off the lead after the first round of the Shenzhen International after he posted an opening 68.

The Greystones golfer made five birdies and dropped just the one stroke to put himself firmly in contention in China.

Levy, who also led the Spanish Open with a first-round 66 last week before going on to finish 14th at Valderrama, carded six birdies and no bogeys at Genzon Golf Club to set the clubhouse target on six under par.

Lee then completed his own flawless 66 just before play was suspended for the day due to darkness, a knock-on effect of an earlier 45-minute delay caused by the threat of lightning.

The first round is scheduled to resume at 0650 local time in Friday, with South Africa’s Brandon Stone just a shot off the lead with one hole to play.

Levy, who carded a 62 at the same venue en route to his first European Tour title in the Volvo China Open in 2014, started on the back nine and raced to the turn in 31 with three birdies and an eagle on the par-five 17th.

Another birdie on the first took the 25-year-old to six under par and in sight of equalling his own course record, but the world number 110 had to settle for eight pars and an error-free scorecard.

“I have some very good memories here and it’s nice to play this course where you had your first win. I played good last week, a few bad rounds with the wind but I feel my game is in good shape and I played solid today like the last round in Valderrama.

“I gained some confidence the last few weeks and it’s nice to play a golf course you like. I know the way you need to play well here and it was a perfect day for me.

“Valderrama was really tough and I used a lot of energy on that. This week I don’t practice a lot, I just walk the course, play the pro-am and to shoot six under today was really good.”

England’s Tommy Fleetwood who feels he has some “unfinished business” in the event after missing out on the play-off by a single shot 12 months ago, carded four birdies and one bogey in his fourth consecutive round of 69.

Scotland’s Richie Ramsay was challenging for the lead at five under par after 13 holes before a hat-trick of bogeys from the 14th, but stopped the rot with a birdie on the 17th to also finish three under.

Stephen Gallacher recovered from a double bogey on the 15th with birdies on the next two holes to record a two-under-par 70 in his first tournament since February after undergoing hand surgery, while defending champion Kiradech Aphibarnrat and two-time Masters winner Bubba Watson could only manage matching rounds of 71