Paul Dunne four shots off the lead in San Diego 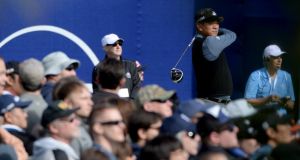 KJ Choi of South Korea tees off on the seventh hole during the third round of the Farmers Insurance Open at Torrey Pines South in San Diego, California. Photograph: Donald Miralle/Getty Images

Ireland’s Paul Dunne remains on course for a top 10 finish on his USPGA Tour debut at the Farmers Insurance Open in San Diego after the 23-year-old from Wicklow carded a third under-par round at Torrey Pines.

Dunne made a birdie on the par-five 18th hole on the South Course in a one-under 71 that moved him to five under and a share of 17th position.

With wind and rain set to toughen conditions in Sunday’s final round, Dunne will be aware that anything can happen as he looks to close the four-shot deficit on joint-leaders Scott Brown and KJ Choi.

South Korean veteran Choi moved within sight of his ninth USPGA Tour victory when he earned a share of the lead with American Brown after the third round.

Choi also birdied the 18th to shoot even-par 72 and join Brown (70) at nine under-207, one shot ahead of Jimmy Walker and Gary Woodland at Torrey Pines.

Choi, winless on the PGA Tour since 2011, was delighted to give himself a chance of ending his drought.

“This course is very important on the tee shot and second shot but more important is iron play,” the 45-year-old told reporters.

“Today my greens in regulation was a little bit low, but my chipping was good and the putting was good.”

Co-leader Brown recently became a father for the second time, but on Sunday will be focused on trying to secure his second tour victory.

“Any time you’re close to the lead or in the lead, it’s obviously pretty good feeling,” he said.

“I’ve been driving it well for three days, really, and hopefully if I can continue that tomorrow, I’ll be able to post another decent number. The weather’s going to be brutal, so we’ll just see how it goes.”

Swede Jonas Blixt shot his second straight 66 to vault within two shots of the lead, an unlikely position after he opened with a 77.

Nobody has recovered from such a poor start to win the tournament.

“You don’t get too many chances to win on this tour, and when you do, you really got to try to get it,” said Blixt, the 2014 Masters runner-up with Jordan Spieth.

“I felt like there was a low score out there on the South Course. I shot low here before and figured maybe I can have one of those rounds today and hopefully one tomorrow. We’ll see what happens.”

The day provided plenty of excitement, with American Ben Crane and Swede Freddie Jacobson both holing out with long irons to eagle the par-four 15th, but Jason Gore’s albatross from 250 yards an the par-five 18th was the pick of the bunch.

Shane Lowry failed to fire in his third round, a one-over-par 73 leaving him on one under going into the final round.