No par three joy for Harrington 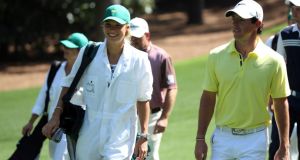 Rory McIlroy walks with his caddie Caroline Wozniacki during the Par 3 Contest prior to the start of the Masters. Photograph: Andrew Redington/Getty Images

Pádraig Harrington missed out on a fourth victory in the traditional par-three contest on the eve of the Masters, but was unlikely to be too disappointed.

Since the event started in 1960, nobody has ever become par-three champion and Masters champion in the same week, with Harrington continuing the “jinx” after wins in 2003, 2004 and 2012 – although he twice had to share the title after bad weather prevented a play-off.

The three-time Major winner was in contention again when he posted a three-under 24, but then saw Ernie Els and Nick Watney finish on four under, Watney by making a hole-in-one on the ninth.

Bo van Pelt looked set to take over the lead when he reached the ninth green at five under par, but, clearly believing in the jinx, he let his sons have a putt each before holing out.

That meant his score would not count and left Els, Watney, Ted Potter Jnr, Matt Kuchar and Phil Mickelson tied for the lead on four under.

Els and Watney — who had fired a hole-in-one on the ninth — declined to compete in a sudden death play-off. Kuchar, Potter and Mickelson returned to the eighth hole and three-time

Masters winner Mickelson was eliminated when he could not match the birdies of his opponents, and Potter then clinched the unwanted title with another birdie on the ninth.

World number two Rory McIlroy had tennis star girlfriend Caroline Wozniacki on the bag, saying: “It’s very special. Caroline could have come last year but it did not quite work out, but I really wanted her to come and see what it’s all about.”

Burnley hold on for a point to leave Arsenal stuck in 10th 14:54
Owen Doyle: Culture of ‘clip memory’ among modern referees not cutting it on the pitch 13:30
European Indoors: Sarah Lavin and Sean Tobin clock lifetime bests to advance 13:20
Lions tour will not take place in Australia this summer 11:39
England all in a spin once again as India seal the series 11:00
Here is your handy guide to sport on television this week