Mickelson in pole to end long US Open wait at Merion

Irish struggle badly on Day Three, as McIlroy admits to confidence issues on the course 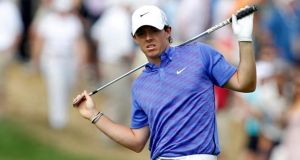 Northern Ireland’s Rory McIlroy after a shot to the fifth green during the third round of the 2013 US Open at the Merion Golf Club in Ardmore, Pennsylvania. Photograph: Matt Sullivan/Reuters 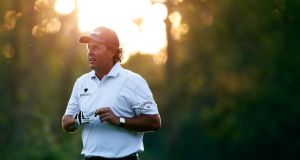 Phil Mickelson of the United States leads the US Open at Merion Golf Club by one after three rounds. Photograph: Rob Carr/Getty Images

Some were left looking for miracles. Others were left seeking their destiny. One was left expecting a special birthday present.

Phil Mickelson, with his 43rd birthday falling on the final round of the 113rd US Open, proved that his pre-championship preparations – which involved going home to California for his teenage daughter’s school graduation and only arriving into Philadelphia hours before his scheduled first round tee time last Thursday – was the only player who managed to reach the 54-hole stage with a sub-par score.

In Saturday’s third round, Mickelson – a five times a runner-up in the championship – shot a 70 for 209, one-under-par, which gave him a one shot lead over the trio of Hunter Mahan, Steve Stricker and Charl Schwartzel.

Luke Donald was a stroke further back, after suffering a double bogey six on the 18th where he pushed his approach into thick rough. With seven players bunched within two strokes of the lead, Mickelson doesn’t have much room to manoeuvre in his quest for a fifth career Major and first US Open after so many close calls.

“It’s got the makings to be something special, but I’ve still got to go out and perform,” said Mickelson, seeking to become the first 54-hole leader of a US Open at Merion to actually go on and successfully finish the job. “I love being in the thick of it. I’ve had opportunities in years past, and it has been so fun, even though it’s been heartbreaking to come so close a number of times and let it slide.

“I love it,” added Mickelson, who grabbed three birdies on the back nine of his third round but dropped a shot on the finishing hole.

The trio of Irish players all felt the wrath of the course: Rory McIlroy may have outscored world number one Tiger Woods, his playing partner for a third successive round, but the Ulsterman’s 75 for 218 left him in tied-25th; Pádraig Harrington’s 75, which included an ugly triple-bogey seven on the 14th, for 219, put him in tied-31st; and amateur Kevin Phelan’s 78 for 226 left him in tied-65th, with such players as Ryder Cup player Robert Karlsson among those behind him.

Harrington was one of those looking for that miracle.

“Every round you try to play your very best and shoot a good score, (and) hope for a miracle. That’s what you’ve got to hope for. Who knows? Maybe (there is) a 62 in me (in the final round). You never know what’s going to happen,” said the Dubliner.

His third round disintegrated on the 14th, having held things together so well until that point. The triple-bogey came like a punch to the stomach. “Players are hitting shots they wouldn’t normally hit because the US Open makes them afraid of making mistakes,” admitted Harrington, who hooked his drive down the left out onto Golf House Road.

Forced to reload, Harrington then pushed his next drive down the right into thick rough. One shot followed another, and the triple bogey seven left him free-falling. He wasn’t alone.

Among those to run up big numbers were Sergio Garcia, who hit three balls out-of-bounds on the 15th in running up a sextuple 10. Nicolas Colsaerts, well in contention, ran up a triple bogey seven on the 18th. It was that kind of day.

Garcia was subjected to some tough times from spectators. When he was introduced on the first tee on Saturday, a spectator shouted “fried chicken” and another followed up with “no joke” in an obvious reference to the Spaniard’s recent comments about Woods that were construed as being racist. There were also clucking noises from behind the ropes.

“I think it was always a possibility,” admitted Garcia, “obviously there’s a group that are trying to be funny and stand out. They shout a little louder than the rest . . . they’re not very creative.”

McIlroy, for his part, was honest in his assessment of his game. The consistency is still absent.

“I think it’s confidence and fluidity. I don’t have any other way to explain it. I’ve been working on the swing quite hard over the last few months and it looks really good on camera. (Once) I get on the course and I hit a couple of bad shots, I guess it sort of makes you lose confidence . . . it’s a bit of a struggle.”