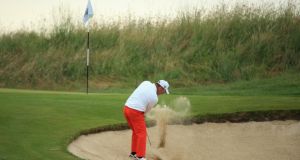 Thomas Levet in action during the first round of the Alstom Open de France at Le Golf National. Photograph: Richard Heathcote/Getty Images

Ryder Cup fans today got a glimpse of what lies in store in five years time as Le Golf National had some of the world’s top players scrambling to recover from bad starts in the first round of the Alstom Open de France.

Five of Europe’s team from last year’s ‘Miracle at Medinah’ are competing at the venue outside Paris which will stage the biennial contest in 2018, but Luke Donald and Ian Poulter were among the players who ran up big numbers on the daunting closing stretch.

Northern Ireland’s Graeme McDowell proved an honourable exception as he shot a two under par, 69.

Donald started with a birdie on the 10th, his opening hole, and was still one under par when he reached the 18th tee, only to run up a triple-bogey seven on the 470-yard par four after finding a fairway bunker off the tee and then dumping his third shot into the water surrounding the green.

The former world number one fared better on the front nine with birdies at the eighth and ninth completing a level-par 71, but playing partner Poulter could only get back to two over after an outward half of 40 that was by no means the worst score of the day.

Defending champion Marcel Siem covered the same stretch in 44 after an eight on the 13th and an eight on the 18th, the German covering the front nine in 10 fewer shots but still signing for a 78.

Matteo Manassero, the youngest ever winner of the BMW PGA Championship at Wentworth in May, had also taken eight on the 18th as he matched Poulter’s 73, while former champion Thomas Levet took a quintuple-bogey nine on the 13th.

Levet, who broke his leg when celebrating his win in 2011 by jumping into a lake, hit three balls into the water as he went out in 40 and also double-bogeyed the ninth in a round of 76.

England’s Andy Sullivan had carded a nine on the 12th and had to birdie his final hole just to shoot 80, while compatriot Gary Boyd could not even manage that as he finished double bogey, par, triple bogey, double bogey for an 81.

At the other end of the leaderboard, Denmark’s Anders Hansen had set the clubhouse target on five under after a 66, the two-time PGA Championship winner carding seven birdies and two bogeys to finish one ahead of France’s Romain Wattel.