McIlroy and Woods still the best of enemies 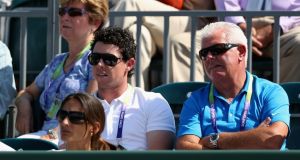 Who ever claimed golf was a selfish sport?

As he seeks to reclaim the world No1 ranking lost on Monday afternoon, Rory McIlroy revealed he has been offered motivation from the very man who took that position from him.

“He told me to get my finger out of my ass and win this week,” said McIlroy of the text message he received from Tiger Woods yesterday morning. This may have developed into a fierce rivalry, but there is no suggestion of it being unfriendly.

Woods’s victory at the storm-disrupted Arnold Palmer Invitational means McIlroy must do likewise at this week’s Shell Houston Open to take back the No1 spot he held for 32 weeks.

Included in a message exchange between the duo was comment on Woods’s new girlfriend, the skier Lindsey Vonn.

“I texted him on Tuesday morning,” McIlroy said. “I thought I would let things all die down from Monday and texted him in the morning. He was ready to go and play at the Tavistock Cup. I just texted him to say: ‘Well done’. We hadn’t spoken in a couple of weeks. I just congratulated him and stuff, on Lindsey as well, and he said everything was good there.

“It looks like he is playing really, really well. He has obviously won three times this year and is back to the top of the rankings. He just seems like he is in a really good place on the course, off the course. So, it is good to see.”

That sentiment, of course, links back to the fact a young McIlroy was in awe of Woods long before the duo struck up a friendship.

“He has been the man in golf for the last 15 years, I guess, and it’s great for golf to have him playing well. Hopefully I can just try and keep up with him,” said the Ulsterman.

“I enjoy his company. He gives me a lot of grief and I try to give some back, but it’s good. He is fun to be around.”

As golfing observers prepare for a lively season-long battle between Woods and his apprentice, McIlroy is publicly nonplussed. His priority, clearly, is to reverse the poor start to 2013 that has undermined his switch to Nike equipment.

“Being No1 was a by-product of playing well and winning tournaments,” McIlroy added. “Tiger has done that more than anybody else this year and if he can take care of that, then the ranking takes care of itself. It is always nice to say you are on top of the world, but if you play the golf that you want to and win the tournaments that you want to, then it takes care of itself.”

And what of the wider debate as to who is the better player?

“It doesn’t really bother me,” McIlroy insisted. “I want to get back to getting into contention and trying to win.”

The reality is that, as he seeks better form, a narrative that is dominated by Woods suits McIlroy perfectly. It was the 23-year-old, after all, who received so much of the focus when Woods’s career seemed to be in a permanently downward spiral.

Now, while far from anonymous, McIlroy can revel in the quieter circumstances.

“It is nice,” he admitted. “I didn’t think I could go into the Masters under the radar. I can sort of now, I can go in a little bit underneath him so in a way that’s not a bad thing. At the minute, with me trying to get my game back to where I think it can be, it is nice to go about my business not as if no one cares but I can go about it and not be the most talked about person in golf. Which is a nice thing.

McIlroy was duly photographed in a relaxed practice environment in Miami last week, where he went to a public course to use the driving range. His girlfriend, Caroline Wozniacki, was also in attendance along with the men’s world No1 tennis player, Novak Djokovic.

“I was actually hitting balls on Saturday night with Djokovic,” McIlroy said. “He has got a good backswing, a lot of rotation for a tennis player. He just needs a lot of down on his downswing.”

McIlroy’s own game was the main talking point of 2013. The powerful re-emergence of Woods has usurped that.

Drogheda United to rename home ground to highlight mental health campaign 08:00
Chelsea condemn Liverpool to latest defeat; Gordon Elliott hearing to begin 07:37
Walk tall, golfers, and tell Leo that golf is not the enemy at the gate 06:35
Mick’s millennium: McCarthy clocks up his 1,000th game as manager 06:00
The interpros give players a chance to prove the coaches wrong 07:09
Here is your handy guide to sport on television this week