McDowell and Harrington battle hard in the Scottish winds 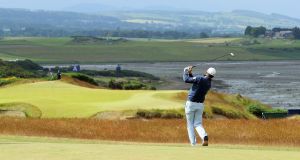 Graeme McDowell hits his third shot on the 18th hole during the first round of the Scottish Open at Castle Stuart Golf Links in Inverness. Photograph: Andrew Redington/Getty Images

A change of heart could pay massive dividends for Graeme McDowell after the former US Open champion survived a windswept opening day of the Scottish Open.

On a day when winds gusting up to 40mph sent scores soaring, McDowell carded a two-under 70 to lie a shot off the lead held by Australia’s Scott Hend and Chile’s Felipe Aguilar at Castle Stuart.

Three-time Major winner Pádraig Harrington produced the best round of the later starters to join McDowell on two under, along with former US PGA champion YE Yang, Sweden’s Alex Noren and the English quartet of Richard Bland, Tyrrell Hatton, Andy Sullivan and Eddie Pepperell.

McDowell had previously accused the Scottish Open of losing its “identity and prestige” by moving to the “one-dimensional” course outside of Inverness, which only opened in 2009.

But after apologising to the tournament sponsors the Ryder Cup star was welcomed back with open arms and enjoyed the tougher test after spending two days in similar conditions at Open venue Royal Troon.

“Myself and Martin Gilbert (chief executive of Aberdeen Asset Management) have gotten a little closer over the years,” McDowell joked after a round containing four birdies and two bogeys.

“I’m really quite surprised by how good the golf course is. It really does feel like it’s designed for this wind direction.

“It’s a beautiful piece of land here and has a really nice architectural mix of short (par) fours and tough (par) fives and it’s a helluva lot more narrow than I remember it. People are going to say I’m full of s**t having criticised it pretty heavily and now I’m saying it’s good. But I’m allowed to change my mind and I like the golf course.”

McDowell missed the cut with rounds of 80 and 73 in the French Open last week, but made the most of his early exit to practice at Royal Troon, where he made his Open debut in 2004.

“I think the two days at Troon were a big help coming into this week,” added the 36-year-old, who needs to produce some good performances to extend his record as the only European player to qualify automatically for the last four Ryder Cups.

“The wind really blew hard Saturday and Sunday when I was there. It really prepared me well and it’s nice to get a couple under and get off to a good start. If it continues to blow like this, this is going to be a grind this weekend. You need to hang in and stay in touch.

“We’ve got the Ryder Cup carrot dangling out there and it is one I want, but I’m trying my best to not go grabbing at it and just try and be patient and go out there today and let the shots go.”

Harrington was at his battling best in conditions he relished as he looks to sharpen his game ahead of next week.

“I wish I played every round of tournament golf in those conditions,” Harrington said. “It was tough and stressful and you had to pay attention all day, but there was nothing I was not familiar with.

“It was all there in front of you and the sort of test you want going into the Open.”

The other Irish golfers in the field were all over par, with Michael Hoey on two over, while Shane Lowry and Paul McGinley both posted five-over 77s. Paul Dunne also struggled and was one shot further back after a 78.

Inverness native Russell Knox was just three off the lead after a 72, but felt play could have been stopped due to balls moving on the greens and criticised the “terrible” set up of the 18th hole, which only one player in the top 20 managed to birdie.

“It’s a 600-yard par five into a 30mph wind,” Knox said. “They could have easily moved us up a tee. But I hit three good shots and three bad putts.”

Five-time Major winner Phil Mickelson remained upbeat despite an opening 76, while compatriot JB Holmes could be forgiven for wishing his clubs had never arrived after struggling to an opening 80.

“It was tough but I think this course is so well designed that it can accommodate difficult conditions,” Mickelson said. “It’s a very fair test. I thought it was very playable even in such challenging conditions.

“Unfortunately I really struggled on the greens and missed quite a few short putts that prevented me from shooting a score around par.”

Holmes only received his clubs at 7pm on Wednesday evening after they were lost in transit from last week’s WGC-Bridgestone Invitational in Ohio.

He immediately headed out to practice but it failed to do him much good as he slumped to nine over par after 12 holes.

The 34-year-old at least finished with a birdie on the ninth to finish eight over and eight shots better than Korea’s Jin Jeong, who has failed to make a single cut in 16 events this season and is a combined 176 over par.