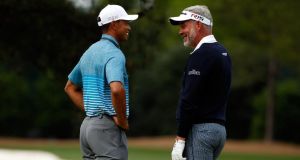 Tiger Woods and Darren Clarke are all smiles during as they talk on the practice range at Augusta National Golf Club ahead of the Masters. Photograph: Ezra Shaw/Getty Images

I walked into another world again on Monday. The sensation never changes. This is my 20th Masters – with a couple of gap years – and, still, after all this time, there is a sense of taking a step into a place unlike any other. The visual impact of looking down the hill from the first hole towards the towering cathedral pines that hide the sacred land known as Amen Corner remains awe-inspiring. The smells remain captivating, of perfumed pine cones. The unbridled giddiness of the fans is still intoxicating.

What has changed so much since I first walked through these gates for the first time in 1991, when Ian Woosnam held off Jose Maria Olazabal to claim his one and only Major title, is that Irish players are no longer here making up the numbers. That year, Ronan Rafferty was the only Irishman in the field. He left with a pair of crystal goblets for an eagle on the 15th hole in the second round, but failed to make the 36-hole cut.

The next year, David Feherty was the sole Irish player in the field. It was the year, 1992, when Fred Couples’s tee-shot on the 12th defied gravity and miraculously stay on the bank and out of the water hazard. Feherty made the cut and finished in tied-52nd which, indicative of the heightened expectations of Irish players these days, was still acknowledged as an achievement. In 1993, there was no Irishman in the field when Bernhard Langer won his second Masters.

For sure, back then, it had seemed that Irish players pursuing Major titles had as much chance of locating the holy grail. Probably, finding that famed salver of yore might have been considered an easier challenge.

Since Pádraig Harrington opened the flood gates with his breakthrough Major win in the British Open at Carnoustie in 2007, only the USA – with all its golfing might and 11 wins in that same timeframe – has managed to win more Major titles than the island of Ireland. Since 2007, Irish players have won nine Majors: Rory McIlroy (4), Harrington (3), Graeme McDowell (1) and Darren Clarke (1).

It is worth putting some perspective on that magical run from 2007. In the same time, England has managed just one (Justin Rose). Scotland haven’t won any. After the USA and Ireland, the next biggest haul is four by South Africa. Germany – and Martin Kaymer – have two. Australia? One. Same for Argentina and South Korea.

So, Ireland’s golfers are not only punching far above their weight, but are delivering the goods with a regularity that is bettered only by the USA. Of course, the missing link – from an Irish perspective – is that of a Masters triumph. A green jacket would, of course, go nicely with any fashion-conscious golfer from our island . . . but the real fun would be in determining the menu for the following year’s Champions Dinner. Stew anyone?

The man known as “Gentle Ben” – even if Eamonn Darcy saw a different side when the American snapped his putter in anger when losing to him in the 1987 Ryder Cup – will be kept very busy over the next few days at Augusta.

Crenshaw is playing his 44th and final Masters tournament and has been asked to fill the shoes of none other than Arnold Palmer in Wednesday’s traditional eve-of-tournament Par 3 competition where he will accompany Jack Nicklaus and Gary Player.

“We were sad to learn that Arnold will not participate in this year’s Par 3 contest, but his health is most important,” said Billy Payne, the chairman of Augusta National. “We are pleased to announce that Ben Crenshaw has accepted our invitation to join Jack Nicklaus and Gary Player this year, which we felt was a fitting way to acknowledge the end of Ben’s illustrious 44 years of competition at the Masters.”

Crenshaw, the Masters champion in 1984 and 1995, described the honour as “a privilege”. However, if Palmer’s health improves, then he is expected to rejoin the so-called “Big Three” next year.

Tiger Woods isn’t the only golfer making a comeback here at Augusta, although Kevin Stadler’s hiatus from the sport was enforced and due to suffering a stress fracture in his left hand.

Stadler, a son of 1982 champion Craig, secured a top-10 on his Masters debut last year but hasn’t played since the Tournament of Champions in Hawaii in January when he withdrew with the injury. Putting his fitness level at “70 per cent,” Stadler said: “Basically, I figured if my hand wasn’t detached I’d give it a go here. I had the time of my life last year and I couldn’t miss it.”

And his expectations? “Zero.”

Historically, the 10th hole has ranked as the course’s toughest hole. The Par 4, which measures 495 yards, plays to an average of 4.31.

“I’m trying to take a deep breath and stay in the moment, not let your mind race. Just sometimes say a little prayer. Just trying to relax.” – JB Holmes on his habit of closing his eyes to anchor his thoughts ahead of making a putt.

“It’s Masters week” – Jordan Spieth uses a simple message to find perspective and a new challenge to get over his Houston Open play-off defeat.

“#Masters #Augusta @The_Masters Masters Tournament” – Angel Cabrera seems pretty excited to be back at . . . THE MASTERS!

“Augusta here we come #bestweekoftheyear” – Charl Schwartzel on hot-tailing it out of Houston to get to the scene of his biggest career win.

Holmes heads into the Masters on the back of a win in the Shell Houston Open. The last player to win the week immediately before also winning at Augusta was Phil Mickelson, who captured the Bell South and then captured the 2006 Masters.

The rules are the same for everyone, whether you’re competing in the monthly medal or in the Masters itself.

As such, the fate that befell Roberto De Vincenzo in the 1968 Masters is a salutary tale that not only defines the thin line between success and failure but also of important it is for every player to check their scorecard which is covered by Rule 6.

De Vicenzo celebrated his 45th birthday on April 14th 1968, the final day of the Masters. He started the round by holing out for an eagle on the first hole after which he was serenaded by the galleries with a chorus of “Happy Birthday”. Aiming to become the oldest player to win the Masters, De Vicenzo surged to the top of the leaderboard on the front nine and then found himself in a duel on the home stretch with Bob Goalby.

Goalby birdied the 13th and 14th holes and grabbed an eagle on the 15th. De Vicenzo responded to the challenge with a birdie on the 17th to take a one shot lead. On the 18th, De Vicenzo bogeyed – his second shot was hit into the gallery – and he missed the 10 footer for par he thought would seal the green jacket. Still, he was all set for the 18-hole play-off the next day with Goalby.

You should always check your scores! De Vicenzo’s card was marked by Tommy Aaron who, unfortunately, put the Argentine down for a par four on the 17th instead of a birdie three. In checking his card, De Vicenzo didn’t notice Aaron’s error and so, instead of the 65 he had shot, De Vicenzo was credited with a 66. Once he had signed for the higher score, he was stuck with it. It was a hard lesson to learn.