Manchip has structures in place to keep Ireland on winning tee 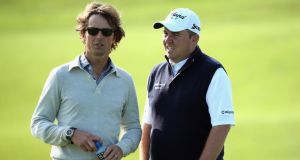 The animation in tone and features when discussing golf brooks no argument about his inherent passion for the sport and his position therein.

Neil Manchip, national coach to the Golfing Union of Ireland (GUI) and the male members of Team Ireland, a group of fledgling professionals that are funded by the Irish Sports Council, is the man who helps mine and cultivate the rich natural resources of amateur golfing talent in Ireland.

In his “spare time” he is Shane Lowry’s coach. There is no conflict in his twin roles, just the requirement of having a knack for judicious time management that must also incorporate the demands of family life.

This weekend he will be in Seattle at Chamber’s Bay, home to the 115th US Open that starts on Thursday week, to cast a discerning eye over Lowry’s preparations. It’s a relationship that dates back to the player’s amateur days.

Manchip’s coaching philosophy could almost be described as pastoral rather than authoritarian. He’s there to facilitate not dictate, a stance he adopts not alone with Lowry but the national panels from under-14s, through the various age grades up to the senior Ireland team.

He is quick to assert that his work with the GUI comes first but that is enough flexibility to allow him to slip away to attend the majors and one or two other tournaments if required.

Lowry’s swing is low maintenance, or perhaps more accurately, the player is in tune with it sufficiently to self diagnose most ailments and tweak accordingly.

Manchip explained: “It’s more about how he’s (Lowry) feeling. He knows how to do it (maintaining his swing) already and as long as what he thinks he’s doing and what he is actually doing is pretty similar, he has a good chance to progress.

“A lot of it (with a player) is down to how they’re feeling. Whether that’s inspired, deflated, bored, excited or anxious. He’s like a lot of guys out there, extremely skilful. It’s about accessing that skill and figuring out what’s the difference between doing it normally as against when things aren’t going your way.”

As far as the courses are concerned he admitted: “There is a great standardisation in the States, mostly big stadium courses. There are not too many rinky-dinky courses,” US Opens occasionally an exception to the rule.

The majority of his time is consumed with his role as national coach, where he might work with players as young as 12 years old through the national panels, a benchmarking process that takes elite groups at under-14, under-16, under-18 through to the senior Ireland team.

“It is very much an agricultural approach in that we try and create the grounds to allow them to thrive and give people help where they want help or where they need a bit of help.

“A player coming into a squad for the first time might already have his own coach, his own fitness programme. We’re very happy for him, to keep doing what got him there in the first place. If we need to fill in the gaps and give him a helping hand in his planning, scheduling or swing then we will.

“Team selections and national panels are down to the scores that they shoot in championships. I wouldn’t say I look for anything. Hopefully they can be themselves, understand themselves and access the ability they have.

“They have to be self-reliant when they are out playing. They have to own their swings and understand themselves properly. The less they are told how to do things and the more they learn to work things out for themselves, the better.”

The young amateurs also get privileged access to Ireland’s elite professionals who drop in occasionally to offer advice. Lowry is an enthusiastic advocate. Manchip revealed: “He loves to be involved. It’s really not that long since he was doing it himself. He’ll answer questions for mums and dads who are concerned about the big wide golfing world out there.

“With some of our amateurs who are turning pro later in the year, they have different concerns. They’ll ask about management companies, sponsorship, caddies, tours all that kind of stuff.”

Three of those expected to cross the divide, Gary Hurley, Gavin Moynihan and Paul Dunne, are part of a 19-strong Irish contingent that will tee it up next Monday in the British Amateur Championship at Carnoustie and Panmure golf courses.

The GUI – the ILGU too because in Leona Maguire they have the number one ranked amateur in the world – boasts a remarkably attuned talent identification and development programme.

GUI chief executive Pat Finn provided some background: “We are so lucky in Ireland that we are the size we are because these guys play against each other in competition all the time from when they are 12 or 13 years old. It is very easy to determine who the best players are because they are the ones with the lowest stroke-play scores.

“Identifying talent for national squads and teams tends to focus on results in championships. The best performers get picked onto panels. It doesn’t really go into science in terms of physical attributes. It’s how many shots it takes him to get the ball in the hole.

“The cost of running championships and the cost of running our coaching programme throughout the branches and the union is something like 65 per cent of the overall turnover of the union; so you’re taking about probably €1.5 million per year. They are not all-high performance but most are.

“We run 80 tournaments including all the championships and send squads to 40 overseas events per year. The Irish Sports Council is a generous benefactor, the R&A offer grant aid for some of our Boys coaching programme, we have good sponsorships and then subs (GUI affiliation fees).

“The majority would be from subs from members which would be about 70 per cent, a little over €1 million.”

“The coaching programme added on top of that at a later point and is definitely helping but without the first three bits, you could have the best coaching programme in the world and it wouldn’t produce champions if you didn’t have the facilities including the conditions they play in.”

Rory McIlroy, Pádraig Harrington, Graeme McDowell and Darren Clarke; nine majors between them and also the number one golfer in the world: solid foundations, impressive structures and easy on the eye.