Maguire sweeps into match-play stages at the British Amateur 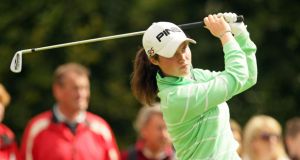 Leona Maguire is through to the match-play stages at the British Amateur Open. Photograph: Inpho

Leona Maguire swept impressively into the match-play stages of the Women’s British Open Amateur Championship at Portstewart yesterday as she led the qualifiers by the proverbial mile after a second successive stunning round.

The 20-year-old international star from Slieve Russell fired a brilliant five under par 68 to add to her 67 of the previous day for an 11-under par 135 total.

That took her to the top of the qualifiers list by a staggering six strokes from France’s Celine Boutier, Maguire’s predecessor as world number one and Jessica Bradley from Tiverton in Devon.

Maguire’s twin sister Lisa improved by six strokes on her first round to edge into the match-play phase on the cut-off mark of 150-four over par while teenage star Olivia Mehaffey, already the winner of the Irish Girls and Scottish and Welsh Women’s Open titles this season, Paula Grant, Maria Dunne and Jessica Carty also made it through.

But disappointingly Chloe Ryan and Sinead Sexton missed out after a poor two days.

Leona Maguire had four birdies in the last six holes but finished with one of three bogeys in her round and over the two days the County Cavan player carded 13 birdies and an eagle.

“I nearly had a hole in one at the 15th only two or three inches away,”said Leona who actually birdied all four short holes.

Mehaffey from Royal County Down posted a 72 for a 146 aggregate despite making a mess of the last and dropping two strokes.

Lisa Maguire’s card was very mixed as she had four bogeys and five birdies while Dunne carded two birdies in the closing four holes to book her spot in the last 64 and Grant and Carty both came home in 36 to make sure of qualification.

Ryan’s hopes were virtually dashed midway through the first half after she bogeyed the opening five holes on her way to a 79 and two double bogeys cost Sexton dearly.