Duke University student goes to number one in the amateur rankings 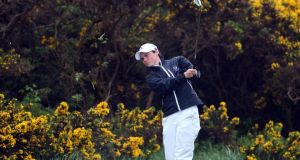 Ireland’s Leona Maguire is the number one ranked amateur in world ladies golf. The 20-year-old freshman student at Duke University in the United States won the NCAA South Bend Regional tournament at the weekend, her second consecutive victory in American collegiate golf and her third this season in total.

Maguire from Ballydonnell in Co Cavan moved up one place from world number two following her one-shot win over Duke team-mate Celine Boutier. She signed for a four-under-par 212 over the 54-hole strokeplay even, becoming just the fifth Blue Devil, and third as a freshman, to win a regional title.

“It is great. To get another win is a bonus and obviously to get the team win was big. We have been really working towards regionals and nationals all year so it is really nice the whole team came together at this time and got the win.”

Duke’s best golfer on the course during the final 11 holes last Saturday was her twin sister and fellow freshman Lisa Maguire. She was one-under-par over those holes as she went on to place tied 76th with a 234. Lisa has moved up 36 places to 814th in the world rankings.