Kevin Na leads Ian Poulter by a stroke in Texas 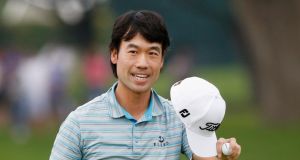 Kevin Na leads the Crowne Plaza Invitational by a stroke from Ian Poulter heading into the final day. Photograph: Getty

American Kevin Na was one shot ahead of England’s Ian Poulter after the third round of the Crowne Plaza Invitational.

Poulter pulled one shot back with a 68 to leave himself well placed going into Sunday’s deciding round, while Charley Hoffman is one shot further back in third after a 66.

Tournament officials opted for an early start with players in groups of three due to the threat of storms at the Colonial course, with the same approach planned for Sunday.

Na was aggressive with his putting on the damp greens and it earned him birdies at the third and 11th holes, though a penalty drop from the trees at the fifth cost him a stroke.

He made a superb up and down from the bank of a water hazard to save par at 13 but missed a five-foot par putt at 15 and needed a birdie at 17 to retain his lead.

“It wasn’t playing easy but I hung in there and broke par,” Na told pgatour.com.

“I’ve still got the lead, which is good, and I’m looking forward to tomorrow.”

Poulter birdied the first after a fine approach and the seventh thanks to a 30-foot putt but undid his good work when he four-putted the 10th for double bogey — taking three strokes from inside four feet on a hole he will regret should he not win the tournament.

He safely holed a six-foot birdie putt at the next, though, and rattled in a 32-foot effort at the 15th to close the gap.

Poulter said: “I played lovely. I gave myself plenty of chances, took a few and then had a bizarre four-putt on 10 — which was strange, to be honest, as good as I’ve putted all week and as good as I’ve hit it all week.”

Hoffman had two birdies and a bogey on his front nine before picking up further shots at the 10th, 13th and 17th.

Masters winners Adam Scott and Jordan Spieth were in a group of seven players at six under.