Jordan Spieth: To win Masters you will have to beat Dustin Johnson

High-class field assembling ahead of this week’s Houston Open 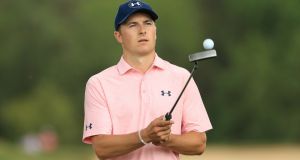 Jordan Spieth success at the WGC-Dell Matchplay on Austin on Sunday means he has secured three wins in as many starts. Photograph: Getty Images.

It is an indication of Dustin Johnson’s current stranglehold on golf that even in his native Texas, with the Masters in such proximity, a Jordan Spieth media conference was dominated by discussion about the world number one.

The mistake would be in believing Spieth is in any way taken aback by Johnson’s prominence.

Johnson’s success at the WGC-Dell Matchplay on Sunday means he has secured three wins in as many starts and seven from 17. He is the short-priced favourite for the Masters next week despite a best Augusta finish of tied fourth. In three Masters appearances, Spieth has not been worse than second.

“I think Dustin Johnson is the guy to beat in golf no matter where you are,” Spieth said ahead of the Shell Houston Open, which begins on Thursday. “Put him anywhere, I think just about anybody would agree with that. He’s the guy to beat. If I play my best golf, I believe that I can take down anybody, and you have to believe that. But I think that right now he is the guy that everyone is saying he’s playing the best golf in the world right now.”

A Spieth smile followed as he was asked about any element of shock attached to Johnson’s stunning form.

“Not the slightest bit,” the 23-year-old said. “I believe you guys can all attest, I called this. I mentioned this going back years: ‘Dustin Johnson is probably the most talented player and it’s a matter of time. Once he gets that click . . . ’ It probably was the US Open [last year] , looking back on it now. He just got over that [major-winning] hurdle. And whatever free-up he needed that we didn’t need him to have, he got.

“I’m not trying to say I told you so, but I definitely called this and I have been quoted as doing so. So I’m not in the least bit surprised that he is the guy to beat. And it’s going to be very difficult at this point, considering he was number one and he’s won two World Golf Championships in two starts. I’m pretty sure he’s got a big ranking lead now.

“Major championships have huge weight and I’m not focused on trying to win majors to get to number one any more. It’s just trying to do it to do it. So, that side of things, getting number one isn’t the pressure that I feel, but that’s the only way to really take big strides towards him because I don’t think he’s letting up anytime soon.”

Johnson withdrew from this week’s event on Monday in a bid to be fully rested for Augusta. Spieth’s own preparations were slightly disrupted on Wednesday by the arrival of a Texas storm, which limited his pro-am outing to only nine holes.

Thereafter, Spieth was typically insightful on the basis upon which he and the world’s other leading players can try to halt Johnson’s run.

“Fortunately I’ve played a lot of golf and competed against him on the weekends,” the two-time major winner said. “I’ve been successful against him, which is a huge advantage, just having done it before.

“The way to do it is to not get caught up in his game. The thing that’s difficult about beating Dustin Johnson is, you get on the tee and by the time you’re hitting your second shot you’re already at a disadvantage on the hole. It’s trying not to feel that way and trying to recognise that you add them up at the end. There’s a lot of ways to do it.

“If you feel like you’re disadvantaged every hole, even though you are percentage-wise when you both hit a good tee shot, you’re probably not going to have a chance to beat him. If you play your own game, having the advantage of having been there before, him knowing that, too; he knows which guys have taken him down and are capable of it and he knows which guys are probably not going to be able to. And fortunately I feel like, you know, I can.” Guardian service