Jordan Spieth the man to catch in Houston

Harrington slips out of the picture after a round to forget 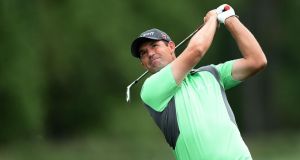 Padraig Harrington hits his second shot on the eleventh hole during the third round of the Shell Houston Open. Photograph: Stacy Revere/Getty Images

Jordan Spieth will take the narrowest of leads into the final day of the Shell Houston Open after a fantastic five under par 67 took him one shot clear of the chasing pack.

The in-form 21-year-old has five top 10 finishes from his seven tournaments this year and will be looking for his second PGA Tour title of 2015 — having won the Valspar Championship last month — on Sunday.

Six birdies and just the one blemish in Humble took the American to 14 under par overall as he continues to build momentum ahead of next week’s Masters.

On his chances at Augusta, Spieth said on Sky Sports: “I believe I’ll be able to handle certain situations better having closed a couple of tournaments out now, I know my tendencies, I know the golf course a little bit better having played a few more rounds on it.

“All in all, I’d just like to hit the ball the way I’m hitting it now, work on my putting out there, work on my speed control and see if I can get in the hunt.”

Scott Piercy, who tied the course record with a 63 in the opening round, is one of three Americans in a tie for second after his 66.

The 36-year-old’s second round 74 had dropped him down the leaderboard but he responded to the setback with a bogey-free round, the joint best score of the day alongside Johnson Wagner, also on 13 under overall.

Austin Cook trailed by one overnight and remains firmly in contention alongside Piercy and Wagner after his 70, while compatriot Shawn Stefani.

English pair Kelvin Day and Paul Casey are two of four players on 11 under, while Patrick Reed and Keegan Bradley are in a tie for 10th.

Reed’s round was highlighted by a hole in one on the par-three 188-yard 16th — his seventh after starting on the back nine.

Overnight leader Andrew Putnam is six shots off the pace after a poor 76, while Mickelson also endured a third round to forget, with his 75 also leaving him on eight under par overall.

Padraig Harrington, meanwhile, will start the final round well down the leaderboard after a disastrous end to his day.

The Dubliner had been making steady progress, reaching nine under with five holes to play, but would drop six shots in the space of four holes as he signed for a round of 74.