Jordan Spieth halfway towards Grand Slam after US Open 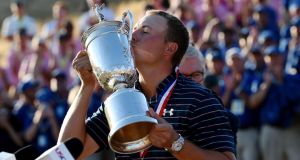 “Wow!” muttered Jordan Spieth, under his breath. They were his first words as a double Major champion, and his shock was shared by just about everyone who witnessed the finale of this 115th edition of the US Open here at Chambers Bay, a comedy of errors with a variety of characters which provided a remarkable conclusion to the championship.

Jordan Spieth was the last man standing, but even he needed to time to take it all in. “I can’t seem to wrap my head around the finish,” he said.

One by one, players with destiny in their hands had pressed the self-destruct button on a course made easier by the USGA who took on the role of kindly benefactors rather than mischievous rulers for the final round.

The litany of mistakes came in the final run for home. Firstly, Branden Grace hit a tee-shot out-of-bounds on the driveable Par 4 16th to end his hopes; Spieth himself suffered a double-bogey on the 17th, only to rescue his hopes with a birdie on the 18th; and, then, almost as if the final act would be the most destructive of all, Dustin Johnson – with a 12 foot putt for eagle to win the title outright – contrived to three-putt. He missed his eagle putt, took a mere 48 seconds to ready himself for the return birdie putt and missed that too. A par left him one shot adrift of Spieth.

“Whatever the putt did on the last hole, I don’t know. I might have pulled it a little bit. But still to me it looked like it bounced left. It’s tough. It’s very difficult (to know),” said Johnson.

So it was that Spieth – at 21 years of age – etched his name into the history books, adding the US Open title to the US Masters he won at Augusta National in April. This time, though, rather than orchestrating his own destiny, Spieth had to rely on calamitous contributions from others. Once again, he was the last man standing; a second Major title in the space of two months, and the first since Tiger Woods in 2002 to win the opening two Majors of a season.

It means the young American has completed two legs of the career Grand Slam and heads to next month’s British Open at St Andrews seeking to complete a third. “It’s hard (to believe) right now. I’m still amazed that I won, let alone that we weren’t playing (a play-off Monday). So for that turnaround right there, to watch that happen, I feel for Dustin, but I haven’t been able to put anything in perspective yet,” said Spieth.

In shooting a closing round 69 for a five-under-par total of 275, Spieth finished one shot clear of joint runners-up Johnson and Louis Oosthuizen, who produced a stirring run of six birdies in the final second holes for a back nine of 29 in signing for a 67 that ultimately proved a shot too many for the South African.

Others, too, had threatened to shoot the lights out. Rory McIlroy, who started out eight shots adrift, had five birdies in a seven hole stretch from the seventh before his challenge fizzled out. McIroy signed for a final round 66 for 280, where he was later joined in a share of ninth place by Shane Lowry. And Adam Scott catapulted up the leaderboard with a closing 64, for 277, that gave him a share of fourth.

But, just as he did in Augusta, Spieth emerged as champion. And he did so despite double-bogeying the Par 3 17th, where his putter deserted him. On the Par 5 18th, Spieth hit a fade off the tee and then a three-wood approach which funnelled down onto the correct level. If he felt hard done by for his break on the 17th where the tee shot hit the upslope and rolled back and off the green, he got a break on the 18th. He two-putted for birdie but, in doing so, felt the best he would get was a Monday play-off.

Of course, Spieth couldn’t account for the drama which was to follow as Johnson had a meltdown on the 18th green with the great prize within reach.

With his fiancée Paulina Gretzky watching on by the 18th green with his son Tatum in her arms, Johnson failed when it mattered most with a three-putt. He sought solace in his family. As he put it, “At the end of the day, golf is golf. I’ve got my family and that’s most important to me. My trophy at the end of the day is holding up my little man. I couldn’t be more proud of myself and my family. No matter what I’m going to keep my head high and I’m going to be happy.”

After his own indiscretion on the 17th which ripped two shots from him, Spieth had approached the final green believing he would need an eagle to win and that a birdie would – at most – only get him into a play-off.

“Walking up to the green, I was saying ‘you got to be careful’. But I felt like I needed to eagle. I told myself, ‘you need to eagle to tie’. Major champions don’t leave these putts short. That’s what I was telling myself. I hit a decent putt. I didn’t leave it short. It got to the hole. It had die speed, which was the speed I wanted. I misread it by a smidge,” admitted Spieth. He walked off believing he had blown his chance.

Later, after Johnson’s failure with the putter, and with his back-to-back Major triumphs sinking in, Spieth gave credit to his caddie Michael Greller, who lives locally, for the win: “I think it will sink in a little quicker than the Masters did given that it’s already happened but, boy, what a team effort. What a team effort the whole week. I didn’t have my best stuff and we were able to get it done. Michael knew this course better than anybody playing this week and he made sure I was in the right spots without my best stuff and that’s why I won.”

He added: “At Augusta I was on and making everything and striking the ball fantastic. He was the one that got me through this week when I wanted to get down when things weren’t going well.”

The final round chase never quite materialised for Lowry, as the Offalyman just never got going. Having started off three shots behind 54-hole leaders Spieth and Jason Day, a final round 71 for 280 nevertheless gave Lowry his second top-10 finish in a Major from his last four, having also finished tied-ninth in last year’s British Open at Hoylake. His round included five birdies but also too many bogeys, including one on the 72nd hole where his tee shot found a fairway bunker and his recovery shot was caught by heavy rough.

“I feel like I played the golf to really have a chance to win at the end, missed a c couple of short putts for par that you can’t be doing on days like this. I just didn’t do enough. It was a good week for me, I’m probably back inside top -50 in the world. I don’t know how far I’m away from my card over here now but a few goals have been reached,” said Lowry, who earned $235,316 which edged him closer to claiming conditional status on the PGA Tour.

McIlroy had threatened to emulate Johnny Miller’s gratecrashing of years ago, when the American shot a final round 63 to leapfrog his way to the title at Oakmont in 1973. McIlroy played like a wizard for 13 holes, putting everyone under his spell with a dazzling run that threatened to break the low score – 63 – in a Major.

The world number one had five birdies in seven holes from the seventh, including a monster from 60 feet on the 13th. As he faced an eight footer for yet another birdie on the 14th, to move to three-under, a thought crept into his head. “I was thinking that I would have a really good shot at winning,” admitted McIlroy, who felt another birdie on the way home and four-under might be enough.

But he missed that par putt on 14, and the fizz went out of his round. McIlroy then missed the green on the 15th , to bogey, and then failed to birdie any of the remaining holes on the run in.

“When I look back, obviously the last few holes of this golf course haven’t been kind to me all week. And when I look back at this tournament that’s where I’ll rue some missed opportunities. I feel like it’s sort of one that got away, especially the way I putted this week. I don’t think I’ve ever hit the ball as well in a Major championship,” said McIlroy, who plans on making a preparatory trip to St Andrews ahead of his defence of the British Open at St Andrews.