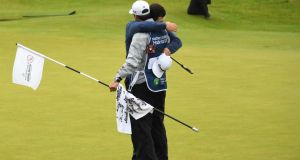 On a grey, wet day on the Causeway Coast, a tale of two young bucks, really.

One of them, Jon Rahm, a golfing colossus who drives the ball prodigious distances, yet possesses soft hands with his short game and putting, reigned supreme to become the fourth Spaniard to lay claim to the Dubai Duty Free Irish Open title; the other, Gavin Moynihan, more a slip of a lad from north Dublin but increasingly finding his feet in the pro game, who took advantage of a late sponsor’s invitation to demonstrate his own golfing pedigree and undoubted potential.

Two different men, but shaped from the same cloth in their ambitions.

Rahm turned in a superhuman effort in the final round to grab this tournament by the throat, with only a missed four-footer for par on the closing hole confirming any human frailty. It was irrelevant by then, his superiority over one and all already confirmed as he claimed a runaway six strokes win over runners-up Richie Ramsay and Matthew Southgate.

This was a display for the ages by Rahm, his final round 65 for a 24 under par aggregate of 264 being a record to par for the Irish Open, bettering the 21-unders of Christy O’Connor Jnr (at Woodbrook in 1975) and Bernhard Langer (at Royal Dublin in 1984).

Indeed, the paths of Rahm and Moynihan – both 22 years of age, but at different stages of their professional careers – criss-crossed frequently throughout their amateur days and it was fitting in its own way that they cross again so soon in their respective professional journeys.

And on a day when Rahm claimed his second professional title, his first on the European Tour to go with the Farmers Insurance Open at Torrey Pines on the PGA Tour earlier this season, Moynihan’s quite splendid closing 64 for 13-under-par 275 enabled him to usurp the more established Irish tour players and claim the distinction of being leading home player. He earned a career-best payday of €84,505 but his tied-14th finish didn’t get him the bonus of a place in next week’s Scottish Open. He needed a top-10 for that.

For Moynihan, news of his participation only reached him last week when his manager Nick Mullen from ISM phoned him during a Challenge Tour event to inform him that Colm McLoughlin of DDF had given him the precious ticket into the tournament, part of the megabucks Rolex Series. From opportunity to deliverance, Moynihan showed what he is made of.

Up to two months ago, Moynihan – a two-time Walker Cup player – didn’t even have status on the Challenge Tour and was playing on the development EuroPro Tour circuit. A runner-up finish in the Andalucia Match Play changed all that, and his career path is definitely headed in the right direction. A tie-up with new coach Shane O’Grady – following the death of his old mentor Hugh Jackson (in September 2015) – has helped that progress.

“With Jacko, we played 12 holes every Friday morning at 10 o’clock at The Island in a buggy. If I was playing well, we’d still play. If I wasn’t happy, after five minutes, he’d know what I was doing wrong; if I was coming over the top or coming too much from the inside. Simple things. Shane has picked it up very quick. It’s just simple things, getting my game back in check. Small things made big improvements.

“My putting has improved a bit, chipping has improved a bit, iron play probably the biggest improvement. Last year I was lost with my swing. Shane has been a huge help and I can’t emphasise that enough. He has gotten my swing back,” said Moynihan who, better than words, demonstrated the health of his game with some fine shot-making in compiling his 64 that enabled him to leapfrog 34 places up the leaderboard. His dejection of Saturday was replaced by a sunny disposition that contrasted with the weather.

On this day, though, Rahm – in the absence of Rory McIlroy – became the poster boy and the magnet for those 20,096 umbrella-carrying, water-proofed spectators who came through the gates and followed his sublime play through the sand hills. His front nine of 31 strokes, featuring an eagle on the Par-5 fourth and a hat-trick of birdies from the seventh to the ninth, which extended to four straight when he birdied the 10th, had him bulldozing the field. He left everyone in his wake.

Twice, he let go of clubs after hitting tee-shots – on the 14th and the 17th – which only served to underscore his focus on winning. Later, he apologised for his actions. There was no need. For, in truth, this was a performance that only provided further lore to the old championship which has found new life under its title sponsor and a decision to move around the island and to commit to an association with links courses.

Rahm – €1 million richer for his win, up to third in the Race to Dubai standings and back into the world’s top 10 – gave a masterclass on this links which first wowed him when he played in the 2014 strokeplay qualifying for the British Amateur. Three years on, he is one of the hottest properties in the sport and committed to defending his title at Ballyliffin in a year’s time.

Looking at the trophy placed beside him after this win, Rahm remarked: “I just look at it and I see Nick Faldo. I see Jose Maria Olazabal. I see Nick Faldo again. I see Colin Montgomerie, Ian Woosnan. Seve! That’s a great list, the greatest European players ever. And to have my name next to it, the last one, Rory McIlroy, it is so special.”