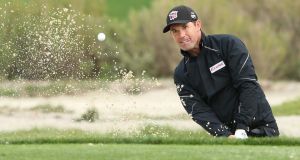 Pádraig Harrington of Ireland chips from the bunker onto the 11th green during the third round of the AT&T Pebble Beach National Pro-Am at the Monterey Peninsula Country Club. Photograph: Christian Petersen/Getty Images

The 35-year-old Texan shared the overnight lead with Jordan Spieth, but eased to 13 under on a tough day for scoring which included play being halted due to high winds.

Walker produced a four-under 67 on the Monterey Peninsula Country Club course to ensure he headed into Sunday as the hot favourite to claim his third PGA Tour win and second of 2014 having prevailed at the Sony Open in January.

New Zealand’s Tim Wilkinson (69) and American Hunter Mahan (72) were on the same course and sat on seven under in a tie for second.

Richard H Lee managed an even-par 72 on the Spyglass Hill Golf Course to be outright fourth at six under.

The Irish challenge stagnated and, in the case of Paul McGinley, dropped off the map.

Pádraig Harrington and Graeme McDowell both shot 72s. At Monterey Peninsula, Harrington was one over and dropped back to two under, while McDowell was level par at Pebble Beach and remained one under.

McGinley will miss the cut after he finished the day on six over thanks to a seven-over-par 78 at Monterey Peninsula.

Walker collected birdies on the second, fourth and seventh holes on the outward nine, blotting his copybook only with a bogey at the par-four fifth. He was steady with pars during the back nine before adding birdies at the 16th and 17th holes to complete the day’s best round.

“I played really solid,” Walker said on www.pgatour.com. “I hit some really good shots into the wind, keeping it low, keeping it down. It played tough.

“Wind was really blowing out there, especially on the exposed holes at MPCC.

“It was pretty brutal, hitting five woods and three woods into nine (and) it’s only 190 yards.

“I mean, it was nuts. But I played solid, made some really good putts and a couple of birdies coming down the stretch.”

Wind gusts of close to 64km per hour prompted officials to stop play as several balls moved after being marked by players. The greens were watered and play resumed before being stopped again later in the day due to darkness, with several players yet to finish their third rounds.

Spieth struggled with the conditions and was five over for the day through 15, down in a tie for 11th at four under. Four-time winner Phil Mickelson was in contention on five under and tied for fifth alongside Blake Adams, Kevin Na, Ryan Palmer, Pat Perez and Jim Renner.

England’s Brian Davis and Scotland’s Russell Knox were the best placed Europeans, tied for 18th on three under overall after both carding rounds of 70 on Saturday. The third round will be completed on Sunday, deciding the 54-hole cut line.