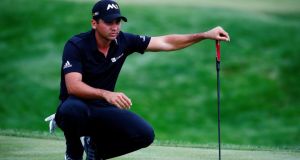 Jason Day of Australia lines up a putt during the First Round of the BMW Championship at Conway Farms Golf Club. Photograph: Jamie Squire/Getty Images

Jason Day, in pursuit of world number one status and a fourth win in six starts, was poised for a possible 59 after charging four shots clear in the weather-hit opening round of the BMW Championship on Thursday night.

Day, who could leapfrog Rory McIlroy and Jordan Spieth to reach the top of the rankings with victory this week, produced sizzling form as he moved to 10 under par after 17 holes before play was suspended for the day due to the threat of lightning.

That left the Australian world number three a commanding four strokes ahead of American Daniel Berger, who eagled his final hole, the par-four ninth, for a six-under 65 in breezy conditions at Conway Farms Golf Club.

Day had just hit his tee shot 346 yards into the right rough at the ninth, his final hole, before the siren sounded to halt the action and he faces a second shot from 44 yards for what would be a sensational eagle.

Should he hole out from there when he returns to the course on Friday morning to complete his round, he would become only the seventh player on the PGA Tour to shoot a 59.

“I feel like this is one of the best rounds I’ve ever played, especially with how the wind is.

“Just the way I’m playing, hitting the greens and putting and just how everything is kind of going, hitting it long and straight ... it’s a good thing for success out there.”

Masters and US Open champion Spieth was part of a four-way tie for third at five under as he tried to keep pace with playing partner Day in the third of the PGA Tour’s four concluding playoff events in the season-long FedExCup race.

Spieth was level with fellow Americans Brendon Todd, who returned a 66, Kevin Chappell, who had completed 16 holes, and Justin Thomas, after 13.

Day, who won the Canadian Open, PGA Championship and The Barclays in his last five starts, chalked up four birdies in his first six holes and though he gave a shot back on the 17th with a three-putt bogey, the 27-year-old then caught fire.

He birdied the 18th, holed out for eagle from a fairway bunker at the par-four first and added back-to-back birdies at the second and third to storm three strokes clear.

Day picked up further shots at the seventh and eighth to get to 10 under and raise hopes of a magical 59, then hit his tee shot at the ninth before play was suspended.

Spieth was unable to keep pace with the red-hot Australian, despite registering a hole-in-one at the second and a chip-in birdie at the third, and was five under for the round after 17 holes.

World number one McIlroy was at three under after 12 holes in an elite field of 70 players from which just 30 will advance to the Tour Championship finale next week in Atlanta.

PGA Tour veteran Jim Furyk, who shot a 59 two years ago at Conway Farms in the second round of the BMW Championship, withdrew from the tournament with a wrist injury after completing just six holes in the opening round.

1 Is it time for the New England Patriots to tear it down and start again?
2 Reality Bites – Tales from the new normal: Caitríona Cormican
3 Nicholas Quinn: ‘Swimming became how I dealt with grief’
4 Michael Schumacher’s family share rare update on condition
5 Mystery of former Ryder Cup star Anthony Kim rumbles on
Real news has value SUBSCRIBE