It’s time to put two very frustrating weeks behind me 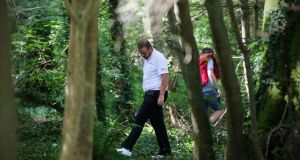 Shane Lowry searches in vain for his lost ball on the 18th during the Irish Open at Fota Island. Photograph: Cathal Noonan/Inpho

I’ll tell you how tired I got the other evening. I went back to my hotel room in Cologne, ordered room service and intended to watch some of the World Cup on television but never got to see too much of it. I fell asleep.

The sporting world had changed, or so it seemed, by the time I woke up. Luis Suarez was all over Twitter and you can only shake your head and wonder how someone, let alone a professional sportsman, can do that kind of thing.

The worst that tends to happen on a golf course is someone occasionally flinging a club towards his golf bag out of frustration or, more likely, a few effs and blinds. I will put my hand up and plead guilty on that score on the odd occasion or two. I wear my heart on my sleeve when it comes to showing my emotions; that’s who I am.

The past two weeks have been frustrating, missing the cut in both the US Open at Pinehurst and the Irish Open at Fota Island by ONE shot each time. What hurts the most is that I thought I actually played good golf most of the time only for a couple of sloppy mistakes to come and bite me.

Pinehurst seems like such a long time ago but it’s only two weeks. Missing the cut there was annoying. I had a bad last three holes and I have to learn from that. Then, the Irish Open! I felt I didn’t put a foot wrong for most of the round then missed a couple of shortish putts and, again, I’m left missing out by a shot on getting into the weekend.

It was a tough weekend for me, not to be playing in the final two rounds. Most times, I’d get away from a place as quickly as I can if I miss the cut. You want to get out and get away. But I hung around in Cork for Friday night and went out to dinner with my girlfriend, Wendy, her sister and her boyfriend.

Staying around also meant I got the chance to meet my coach Neil Manchip for a coffee on Saturday morning. He feels my pain. There are people who offer advice, think they are doing the right thing, but sometimes you don’t want to hear. You listen anyway, but you really don’t want to hear them. Neil is not one of those. You always come away from those talks with a clearer head.

About the only good thing that happened to me last weekend was on my detour home from Cork on the Saturday. We went via Aughrim to take in the Wicklow-Offaly match and, although the result there didn’t do anything to improve my mood, I at least was reminded of how genuine people can be.

One of the stewards at the grounds saw me getting out the car, recognised me and brought me down to a turnstile to get in for free. It’s those sort of little things that I love about here, kind gestures that do your heart good.

I’m missing too many cuts and too many of them by one shot. I need to get back to making a few cuts. I’m looking for the right kind of consistency. Consistently missing cuts isn’t fun. If you are consistently finishing 50th every week, it’s not much fun either. I’d like to be playing four rounds every week, you learn things from playing weekend golf and about getting yourself into contention.

On the flip side, I suppose, there’s also the type of inconsistency that Graeme McDowell had at one point last year where he missed the cut in five of the eight tournaments he played but WON the other three. I wouldn’t mind that either if I’m honest.

I was out on the course – playing in the pro-am – when I heard the news about Rory McIlroy declaring for Ireland in the Olympics. Was I surprised? Yes, a little bit. But it has clarified what I need to do if I want to make the team for Rio. Anyone who knows me knows I am a very patriotic person. I love being Irish and I would give anything to play for Ireland in Rio in 2016. I am going to do my best to make that team. I’ll probably have to be top-15 in the world to make it. Two years is a long time in this sport and you never know . . . .

I’d love to be pulling on an Ireland shirt for the Olympics and I will keep working hard and doing what I am doing to try and make that happen.

On another front, I am delighted with my new sponsorship with Bank of Ireland which started last week for three years. It’s a big deal for me to be involved with such a big brand in Ireland and I’m looking forward to the relationship. They are great supporters of Irish sport and it means I have “Ireland” branded over my heart!!

I’m tired but my golf is good. I’m not going to be defensive. I’m here to compete, not just looking for the top 10 that would probably be enough to get me that ticket to Hoylake. I want to give myself half a chance going into Saturday and Sunday.